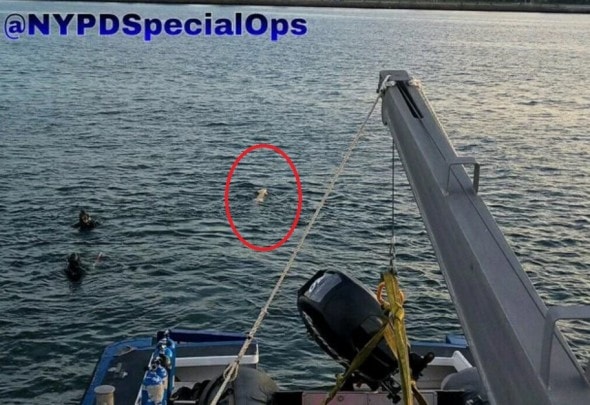 A dog called Chase that had been missing since Thursday was rescued from the waters of Gravesend Bay in New York.  No one is quite sure how Chase ended up in the water, but thankfully he’s safe and sound with his human dad, Miguel Vazquez, once again.

When Chase did go missing from home on Thursday, it sent Vazquez into a terrible panic.  He searched all the streets near his Coney Island home, but just could not find Chase.

“I was so upset yesterday, I couldn’t sleep,” said Vazquez.

At around six in the morning, police were getting 911 calls about a dog stuck in Gravesend Bay.  The dog was reportedly a white, German shepherd that was struggling to keep his head above.  The NYPD sent in two of their scuba divers as quickly as they could, and they got Chase out of the water and onto dry land.

It just so happens that a family member of someone who works for the NYPD had remembered seeing the dog in missing posters that had been put up all over Vazquez’s neighborhood.  They also mentioned seeing the dog on the “Lost and Found Pets in Brooklyn” Facebook page as well.  This allowed for Chase to get back to Vazquez so much quicker than the standard amount of time it can usually take for a happy reunion.

“That’s how the connection was made,” said Vazquez.  “I’m incredibly happy.  I’m a single guy, so that’s my companion.”