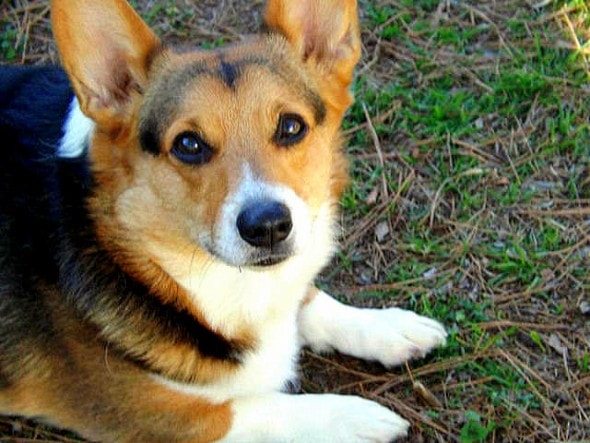 By Didi Paterno-Magpali | D for Delicious

We didn’t have Obi Juan as a puppy – we adopted him as a full-grown corgi. As of late, The Husband and I are Obi’s 6th owners.

Yup, Obi’s bounced around a number of owners and I’ve always wondered why. He was potty trained; save for a few accidents when he just couldn’t hold it any longer. He knew when it was time to get into bed. Say “bed” or “beddy” and he will trot towards his bed and hop into it. He knew how to sit. He played fetch nice. He came to us when we called his name; well, most of the time. He travelled very well, sleeping in his spot at the back, not demanding to be played with. He was pretty chill at home as well, no demands to play when we were busy.

So I really didn’t get it.

He was extremely cute, uber handsome, plus he seemed to be, rather, he is a good, sweet dog. And I wanted to thank whoever who had him first for training him well, which made our lives with Obi so much easier. And that chance of meeting that person was slim to none. Who knows where Obi really came from? When his birthday was? How old is he really?

But yesterday, I met this person.

Okay, I didn’t meet her in person. But meeting her online was more than enough for me to get to ask questions about Obi’s history.

So how did I get to meet her?

I am part of a Facebook group for North Texas corgi owners. And there I usually post questions, updates and the like about Obi. Last Monday, I brought Obi to the vet to get his chipped tooth checked, which eventually led to a tooth extraction. This piece of news I shared with the group along with a very nice picture of a smiling Obi that I took from our dog park run last weekend. 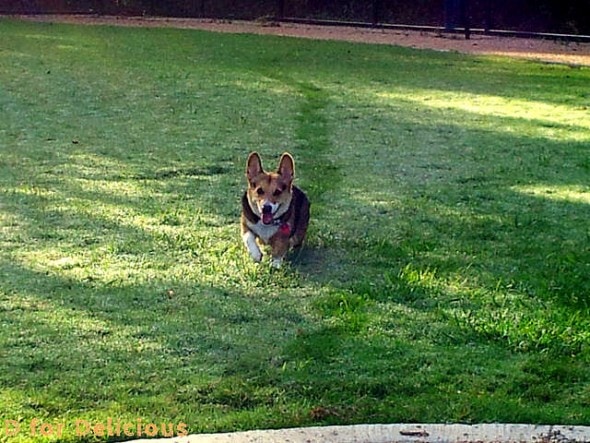 Then a lady left this comment: “I was obiwan’s first mom, and we had to give him away. I am SO SO HAPPY to see he is doing so well and has such a good mommy!”

OMG! I just had to talk to her, so I told her that I would PM her. And talk we did. Here was how our conversation went (more or less as I did put together some of the related details):

I told her that we didn’t change his name because he did look like an “Obi,” as my Tita would say, “our only hope.” That’s a Star Wars reference for y’all. 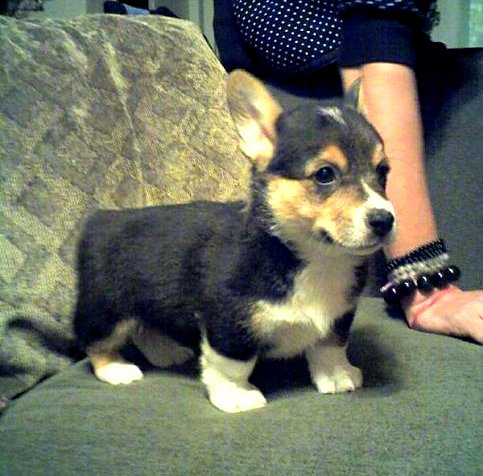 I asked her if she got him as a puppy. She and her husband did get him at six weeks old on January 29, 2009 from “Hidden Star Farm” in Roanoke, TX.

She told me how he was a good, sweet dog, but needed to be the only dog. He got into fights with their two other dogs on food (Why am I not surprised?) among other things. This was the reason that they had to let him go with a heavy heart. But she is now relieved and happy that Obi is in a good home.

I thanked her because she and her husband did a very, very good job of training him. And of course, I asked if she had pictures of Obi as a puppy. What pet parent would not want to see baby pictures of their loved one?!? 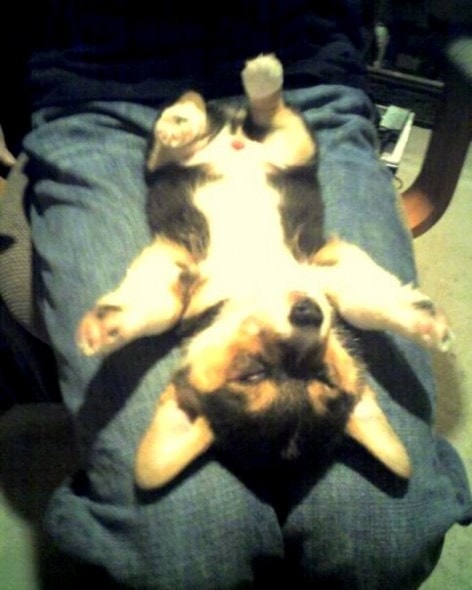 She shared an entire album of Obi baby photos! And some when he was a little older – I’ve learned that Obi was born in December 12, 2008, which means that he is turning seven years old later this year. The anxious smother (smothering + mother) in me kicked in. I’m now aware that in a few years, we will have a senior doggie under our wing.

I told her that since they let him go, we were the 5th owner. Officially, that makes us the 6th owner. She was really sad to know that because she thought we were the 3rd owner. After they’ve decided to let Obi go (which apparently led to a lot of fights), they gave him with CKC papers and all to a friend’s brother, whose dog passed away. They thought that he would take good care of Obi since he was in need of a doggie companion and asked him to promise that he’d return Obi to them if it didn’t work out. He promised that he wouldn’t take Obi to the shelter ever. They were afraid that Obi, when surrendered to a shelter, would be put down. 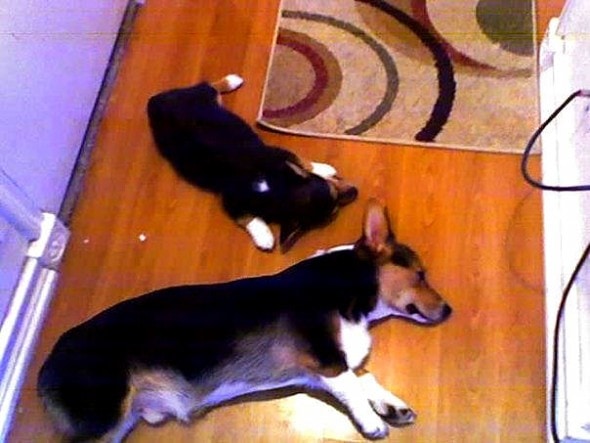 We really don’t know what happened, but he eventually had to surrender Obi to the shelter after a year or so (could be a little less than a year even). As I’ve learned through one of Obi’s other owners, whom I also met through this same Facebook group, this guy gave Obi to his mother, who did not enjoy Obi’s company and she was the one who surrendered Obi to the shelter.

Three owners down and three more to go.

Obi was luckily picked up from the shelter by a nice lady, who wanted a companion dog for her other dogs. She eventually learned the hard way that he had to be the only dog. She had him for two weeks, then was returned to the shelter. This is owner #4. 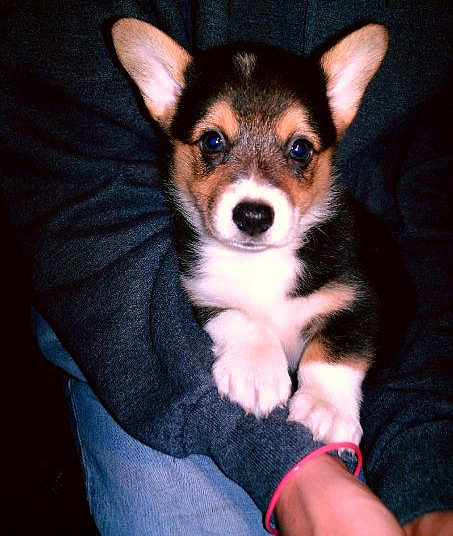 Another lady, who also wanted a companion for her corgi, adopted Obi from the shelter. As you should clearly know by now, Obi did not get along with the original corgi and had to be let go. She, owner #5, had him for around two months until I sent her that message on Rescueme.org earlier this January.

I wish that I had taken a screenshot of Obi’s Rescueme.org posting, but I never got to doing it as it all happened so fast. Owner #5’s posting of Obi said he was a purebred Pembroke Welsh Corgi being given away for free. FREE! Plus she lived a few miles away from us. So The Husband and I met her and Obi on January 10th and took him in on January 12th, 2015. We are owner #6. 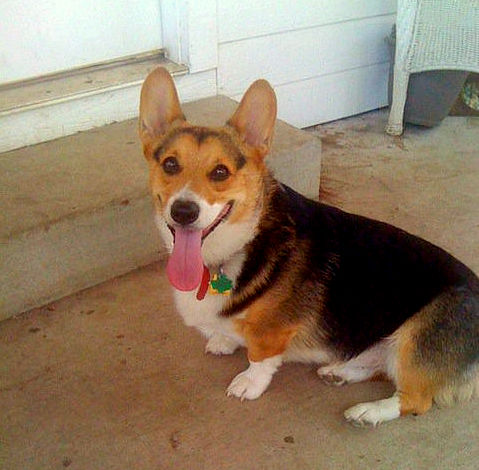 Obi then was so chubby at 36 lbs, smelled so doggie, which The Husband complained so much about. But he was a good dog, who was somehow already used to be passed around from owner to owner that he only cried as owner #5 drove away from us. After she left, he was okay and happily went along with me to his new home.

Obi has been with us for exactly eight months and four days. I think we’ve done a good job so far and he will be with us for the rest of his life. 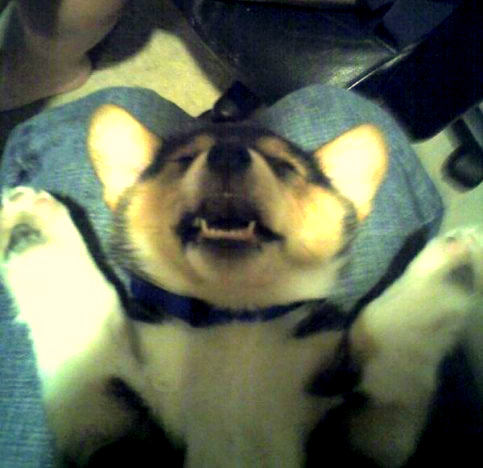 45 thoughts on “Obi Juan, and How His Sixth Owner Was HIS Only Hope”