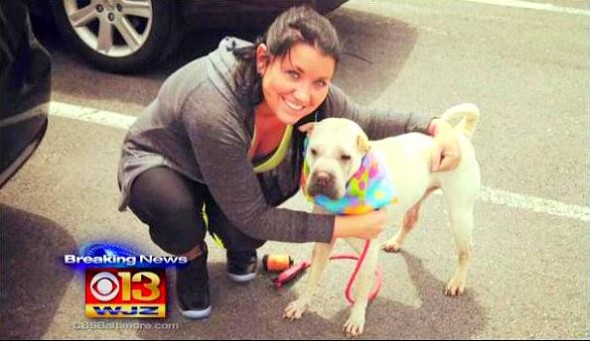 A Baltimore police officer has been arrested, charged with felony animal cruelty, and suspended without pay for slitting the throat of a wandering Shar-Pei named Nala who only nipped the hand of a woman who was trying to catch her.  His fellow officers are appalled, and will not condone his actions.

A woman called Baltimore City Police around 9 am on Saturday to report that she’d been nipped on the hand by a stray dog she was trying to rescue, and she needed some help trying to catch her.  The wound was superficial, and Emergency Services were called in to detain the seven-year-old Shar-Pei with a catch pole.

Some time after that point, a police officer pulled out his knife and slit Nala’s throat, abruptly ending her life.

“Officers were appalled by what they saw, as were other citizens,” said police Deputy Commissioner Dean Palmere.  “There is no procedure or training that justifies this behavior.”

Catch poles keep aggressive dogs at a safe distance from officers, and the department had “gone through great lengths” to prepare officers for dealing with almost any circumstance involving dogs.

“We have no words to describe this,” police Deputy Commissioner Jerry Rodriguez commented.  “To say that we’re appalled at the allegations I think is an understatement.”

Today the officer, who remains unnamed, was arrested and charged with animal cruelty and has been suspended without pay.

“This is an outrageous and unacceptable breach of our protocol.  The BPD does not condone and will not condone such actions,” Palmere stated.

“She was just the sweetest dog and would never hurt anyone.  She was just scared that day and through all of those events – scared and lost, thirsty, hungry – yes, I’m very sure that she bit someone, but the actions after that were not okay,” Gossard said.

She is brimming with fire and spitting venom at the officer who viciously and sociopathically took her beloved Nala’s life.