I’m a Police Officer in Baltimore City. I am originally from Wilkes-Barre, and I am a fan of your organization and Pit Bulls. Today I received a call while on duty about a vicious dog chasing kids.

When I came on the scene, I noticed people yelling out their windows at the dog. I followed the dog into an ally to see how it was acting. Going on my own approach, being a dog lover, I got out of my car and called the “vicious dog” over to me. The dog came over with it’s tail between it’s legs and panting. 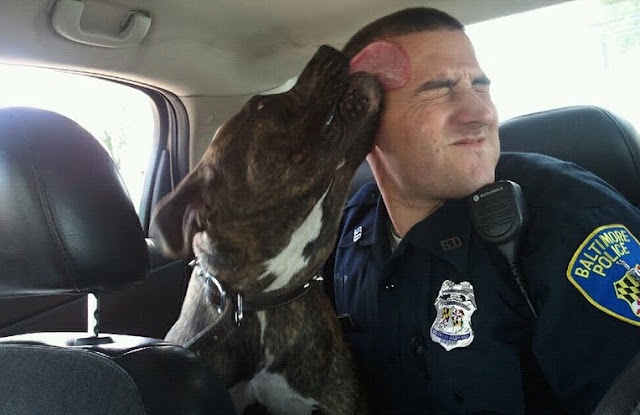 I grabbed my water bottle and the dog sat down next to me and began licking my pants. I started giving the dog water. I brought the dog over and waited for the pound to show up. My partner was not a fan of dogs and was startled by my approach. I suggested to him that this dog cannot be put down, and should be taken to a shelter. We took it upon ourselves to take the dog to the shelter, and transported it in the back seat in the back of our patrol car.

Then I decided that I wanted to keep the dog, and spoke to the shelter about the steps to take to adopt it. The dog was originally kept outside and was filthy, and now it just might have a new home. I know you like positive pictures so I have attached a few. Have a great day and keep up the good work!