A Mansfield, Ohio city worker drowned Sunday afternoon while attempting to save the life of a dog.

46-year-old Jeff Bard was seen leaning over the edge of his pontoon boat to place a life preserver on a dog he believed was in distress when witnesses saw him slip and fall into the frigid waters of the Clear Fork Reservoir. Bard was not wearing a life preserver of his own, and was not seen again until dive teams recovered his body hours later. 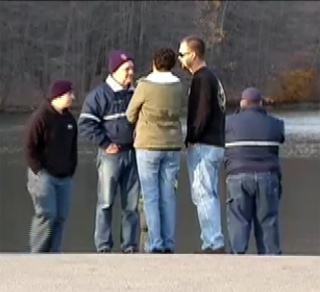 “We do believe he drowned due to the shock of the cold water,” said Chief Gary Foster, reservoir operations supervisor. “It’ll hit you right away.” Foster pointed out that the water temperature was 41 degrees when Bard went in – cold enough to take your breath away, and certain to cause hypothermia after brief exposure.

What Bard didn’t know was that the dog he was trying to save was not in distress, and was out duck hunting with owner Lance Cook. The dog is fine. Cook was visibly shaken by the incident, and expressed concern for the victim’s family in later interviews. He said he did not witness the incident first hand, and was told afterward that Bard had drowned trying to save his dog.

“It confused me — like why would someone be trying to get her out? She wasn’t drowning,” he said. Maggie was simply swimming a final lap at the end of their hunting session. Not seeing anyone near her, Bard must have assumed she needed help. “I’m still in shock pretty much,” Cooke said. “He was a really caring person and an all-around good guy, as you can see from today.”

Morrow and Richland county dive teams located Bard’s body after a four hour search. Chief Foster knew Bard personally, and was saddened by the unnecessary loss of life. He reminds everyone to practice safety on the water – especially in winter. “I’ve been in charge of this reservoir for three years, and something like this has never happened,” Foster said. “All I can say is, ‘Wear your life jackets.”