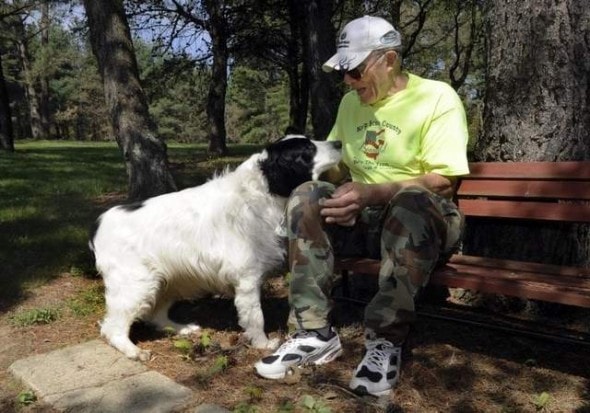 Richard Kelley and his dog, Bella are not only having fun when playing fetch together, but are doing both Mother Nature, and the citizens of Ohio a big favor as well.

When not working, Kelley could often be seen walking or riding a bike for exercise along the highways in Fairfield County.

“I used to ride a bicycle for a few miles a day, but that was only good for a few months a year, and then you got into winter,” said Kelley.

Kelley took up walking for exercise.  Then he got Bella, a golden retriever and Border collie mix.  He is no stranger to doing his part when it comes to keeping things clean.  He could often be seen collecting trash and debris left on the side of roads he’d be walking on.  But, when Bella would come on walks with him, she started doing something a little different.

“She started coming out with me when I would walk,” said Kelley.  “What she started doing was running out ahead and bringing back bottles and cans to me she had found alongside the roads.”

He started bringing bags with them while they take their morning walks together, and Bella does her clean up gig every time.  It’s something that has attracted some attention with the local population.

“People are always stopping, asking if they can help take us somewhere, and I’ve helped people with flat tires.  Just this morning in the rain someone passed me, then turned around and came back to see if they could take me home or somewhere.”

Belle, now nine-years-old, is having knee troubles, and really can’t walk with Kelley as much anymore.

“People are always asking me what happened to her.  She’s nine-years-old and has some knee problems and can’t walk much anymore,” said Kelley.  “She just stays home on the farm while I go out and walk.”

Even though he doesn’t have his companion Bella to go one walks with him, he still is doing his part to help the environment in his area.  He still takes a bag or two with him on walks, collects the trash lying on the roadside, and when he gets home, Bella, the one who started it all, is waiting for him.