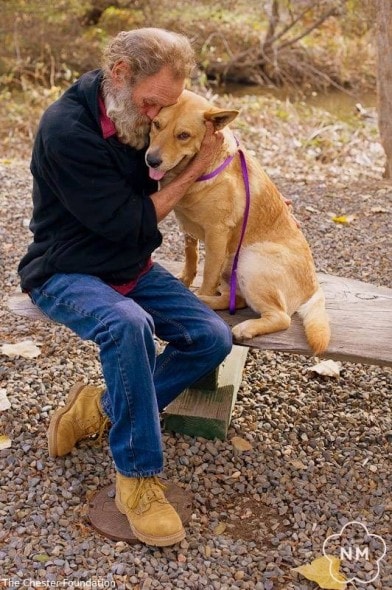 Steve Anthony’s world was nearly destroyed on Monday when his puppy, River, was stuck by a hit-and-run driver. Fortunately, a woman came along who stopped and brought Steve and River to a vet. She also started a fundraiser that collected over $5,000 in 12 hours, ending up with enough to cover the clinic bill and provide the pair with temporary housing.

Steve had picked up some work at a Christmas tree lot in Roseville, California, and was there with his nine-month-old dog. A driver hit River and took off, leaving him to die in the street.

“I see blood coming out of his mouth and nose,” Steve recalled. “I am thinking my poor kid’s head is crushed.”

Two drivers pulled over and helped bring the dog to the side of the road, but Jennifer Martin did more than that when she stopped. With her two small children in tow, she offered Steve and River a ride to the Atlantic Street Veterinary Hospital. 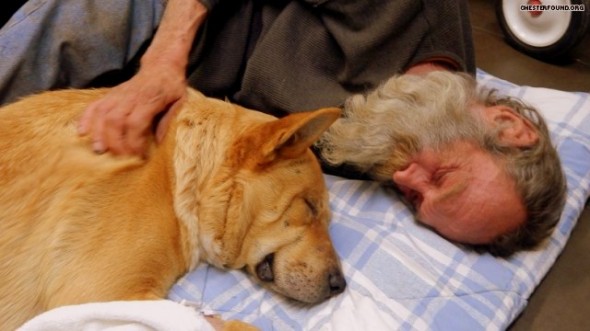 “I called my husband and said, ‘I’m picking this guy up, he’s going in the trunk of my van with his dog – meet me over at the hospital.’”

River’s pelvis was fractured, and would cost thousands of dollars to repair. Steve, who has terminal bone cancer and was living in a cave, had no way to pay for surgery. Jennifer gave him the $75 she had in her wallet, and took to Facebook with their story. She partnered up with The Chester Foundation, a nonprofit organization.

“Donations began pouring in as the news spread of River and his owner’s heartbreaking story. River’s dad has been overwhelmed by the generosity and outpouring of support,” the Chester Foundation wrote.

Over $9,000 was raised in two days. It’s more than enough to cover River’s surgery, and leftover money is being used to put the guys up at a pet-friendly hotel.

“Donations have made it possible to not only cover River’s surgical procedure, but also to raise funds to provide temporary housing. It is essential that River recovers in a confined space and his owner must have a place to stay during the cold winter months. River’s recovery is expected to be long, and a warm place to stay will aid in making a comfortable recovery,” the foundation said. 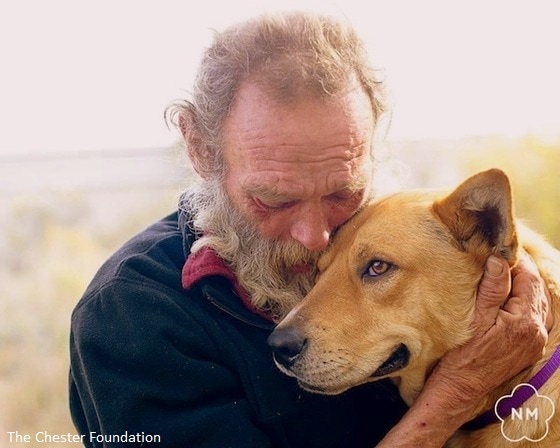 Dr. JT Vida, leader of River’s medical team, had this to say:

“As for the surgery: The fracture was rather difficult as the bones were in more pieces than they appeared based on the radiographs. Fortunately, the surgery went very well and we were able to reconstruct the pelvis using a specialized bone plate. River did very well under anesthesia and recovered nicely in the immediate post-operative period.

“I stopped by Atlantic Street today to assess him. He looked exceptionally good for being less than a day post-op. He was much more comfortable, less swollen and was bearing some weight on the limb with assistance.

“Overall, he has an excellent prognosis if he can be kept confined for the next six weeks. His age, support from the community and love from the owner will take him a long way.”

Steve is amazed and truly touched by the thousands who reached out to offer kind words and lend a helping hand. In addition to money, people donated food and toys for River. The Chester Foundation has called this a “Christmas miracle.” 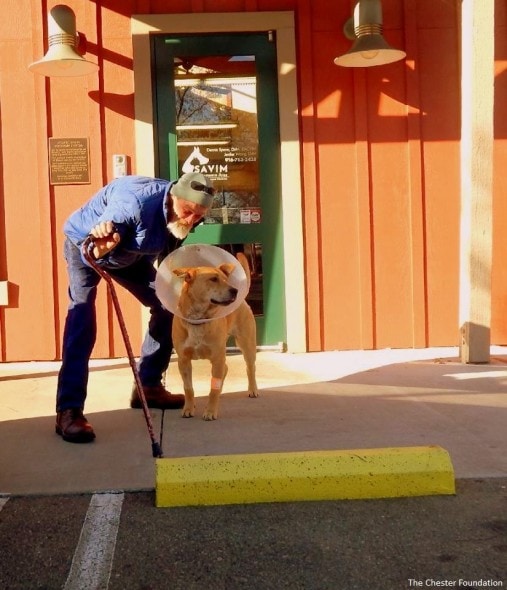 “Thank you everyone, but that’s enough! River is going to be fine,” Steve said. “Please send all donations to The Chester Foundation so you can help another pet that really needs it.”

Charitable contributions may be dropped off at the Atlantic Street Veterinary Hospital – Pet Emergency Center, 1100 Atlantic Street, Roseville, CA 95678, and monetary donations toward Steve and River or another animal in need can be made by clicking here.

Steve would like to be employed so that he and River can live in a proper home. When asked what he needs for himself, his response is always the same: “saving River is saving his life.”

“He wants to stay in Roseville and wants to find employment. Any leads on employment or housing can be called into Atlantic Street Veterinary Hospital 916-783-4655 where River and his owner are staying,” the foundation said.

Make your own Christmas miracle – help a person or animal in need.