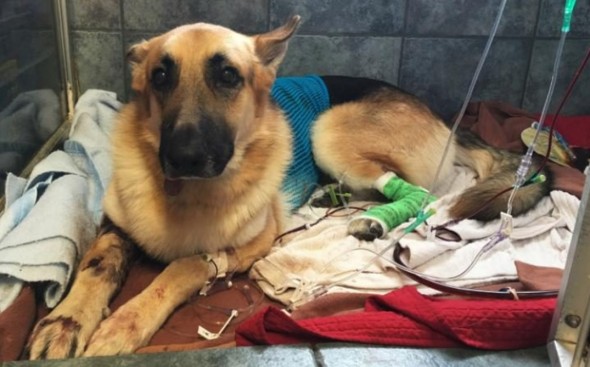 Haus, a two-year-old German shepherd, had only been a part of the DeLuca family for about two months, but it was enough time for him to fall in love with his family.  He loves them so much that he took three bites from a rattlesnake to save the seven-year-old Molly DeLuca, risking his own life in the process.  Thanks to the kind hearts of the people hearing about his story, over $50,000 has been raised to help save his life.

As his story spread like wildfire thanks to social media outlets, more and more people have donated money to help pay the very expensive vet bills he now faces.  Haus had to be treated with and anti-venom and painkillers.  Things were at bit touch and go in the beginning, however, he is expected to make a full recovery.

Molly was playing with Haus in her grandmother’s backyard when the incident happened.  Her grandmother looked up to see Haus jump in front of Molly at one point, but thought it was just play behavior.  It wasn’t until they saw his leg bleeding that they knew something was wrong.  They took him into a vet, and that’s when it was discovered he was bitten by a venomous snake.

Molly’s father Adam DeLuca told the Associated Press, “He just exceeded our expectations all the way around.  Right away, the kids were hugging and loving on him, he always took it, he never did anything.  Whenever anyone came to the door, he would start barking and try to be protective.  He has just been an amazing dog.  He’s the type of dog that when you want to go buy a dog, you pay thousands of dollars and that’s the dog you get.  But we adopted him and got him for free.”

A friend of the DeLuca family set up a GoFundMe page for Haus, and the original goal of $15,000 was met very quickly.  It didn’t take very long for the donation page to grow to $50,000, and the DeLuca family has actually asked that people STOP donating to their fund, and give a donation in Haus’ name to a local shelter instead.

“Haus has enough money to meet his needs,” they posted on the charity site.  “Many other beautiful German Shepherds like Haus are waiting on you.”

1 thought on “Over $50,000 Raised for Rescue Dog That Took Snake Bites to Save Little Girl”