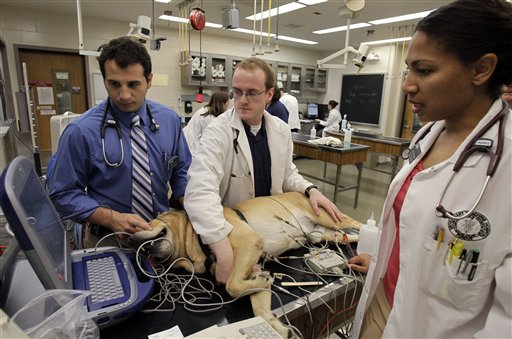 WEST LAFAYETTE, Ind. (AP) — The 8-year-old yellow Labrador lies obediently on the stainless steel exam table, tail wagging, as Dr. Henry Green monitors the dog’s heart rhythm — every beat of which is guided by a pacemaker implanted beneath the scruff of his neck. Grommit, the beloved pet of a western Indiana woman, is part of an elite but growing club of dogs whose lives are being lengthened by technology once reserved for their human masters.

A few thousand dogs have gotten the lifesaving implants over the past two decades. The numbers have risen from 100 to 200 implants a year in the 1990s to the current 300 to 500 a year, said David Sisson, an Oregon State University professor of cardiovascular medicine. Sisson, who did his first canine pacemaker implant in the mid-1980s, calls the trend “a certain amount of payback” considering that the small devices arose from research in the 1940s in which man’s best friend played a key role as test subject.

Grommit, the yellow Labrador, got his silver dollar-size implant in 2006 after tests showed the blackouts he was experiencing were caused by a defect in his heart’s natural pacemaker that put him at risk of sudden death. His owner, Molly Hare, 41, of Terre Haute, Ind., said she didn’t have to think long about whether to allow Dr. Green, a Purdue University associate professor of cardiology, to perform the $2,000 procedure on Grommit. “The options were I could come home and find him dead on the floor or I could have the pacemaker put in and he’d have a long healthy life, so that’s what I chose,” she said of her pet.

In Grommit’s two-hour surgery, typical of pacemaker implants, Green threaded two wires through the dog’s jugular vein into the correct positions in his heart to deliver stabilizing electrical impulses. Next, the pacemaker — a tiny computer and battery encased in a metal shell — was implanted beneath the skin at the back of his neck and the wires hooked up. Canine pacemaker patients get to leave Purdue’s small animal hospital after a day or two. Once at home, they must stay calm for about a month to ensure the wires heal properly and don’t shift. For Hare that meant carrying the 65-pound Grommit down several porch steps whenever he needed to use the bathroom. But the special care looks to have helped the dog recuperate.

A recent exam by Green and three veterinary cardiology students found Grommit’s four-year-old pacemaker is still delivering the electrical zaps needed to keep his heart beating between 50 and 180 beats a minute, depending on his level of exertion. “He looks really good,” said Green, giving the panting dog a pat on the back.

Green, one of about 200 U.S. veterinary cardiologists who can perform pacemaker implants, did his first in 2000 and now performs about 20 a year. A drawer in his office desk is stuffed with thank-you cards from grateful owners whose dogs had successful surgeries. Sisson said the first implant of a human pacemaker in a dog was in 1968, but the procedure was slow to catch on, partly because of cost and lack of availability. The implants started being performed more often by the 1980s, as funeral homes began donating pacemakers from deceased heart patients to veterinarians, he said. But the rise of HIV/AIDS soon left many apprehensive about handling used medical devices, and the emphasis shifted to getting donations of unused pacemakers, Sisson said.

Today, nearly all pacemakers used in dogs and other animals such as cats and horses are donated by medical device makers clearing their shelves of pacemakers deemed unsuitable for humans once their battery life ebbs. The donated pacemakers, worth $5,000 to $10,000, are funneled to a clearinghouse called the Companion Animal Pacemaker Registry and Repository, or CanPacers, that Sisson founded in 1991. The nonprofit CanPacers sells the devices to veterinarians for about $500, and the proceeds go to animal research conducted by veterinary cardiology residents.