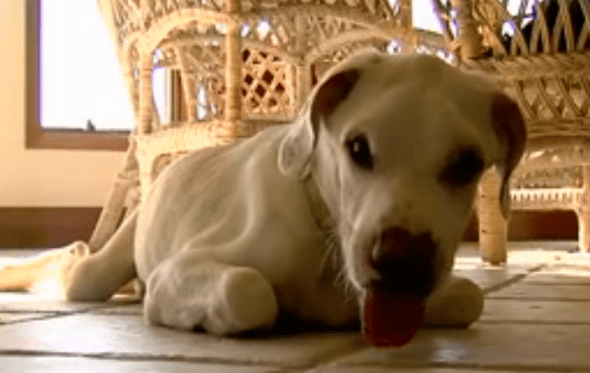 When Zeus was rescued by a no-kill shelter in August he was almost completely paralyzed. With the help of volunteers at St. Francis Community Animal Rescue, Zeus is making progress and inspiring others.

Zeus’ original owners noticed that he was limping when they decided to give him up. Zeus had little hope at the shelter he was sent to in Oklahoma. He was almost certain to be euthanized. Several animal rescue groups stepped in to help Zeus. In August he was taken to St. Francis Community Animal Rescue in Murphysboro, Illinois. Now the 10-month-old puppy has a new chance.

When he first came to the shelter he was severely paralyzed. “He couldn’t lift his head,” said volunteer Dawn Boyd. “He couldn’t open his mouth, his tongue was stuck out.” Just a few months later it’s a different story. Thanks to the help of volunteers Zeus has made some significant progress.  They still don’t know what the cause for Zeus’ paralysis is, but they are focusing on teaching him to eat, stand and hopefully one day walk. Zeus is constantly being trained with massage therapy and swimming. During his first swim floating was a struggle, but now he is able to swim 20 laps across the pool five times a week.

One of the most inspiring things about Zeus is his attitude. “He’s very interested in everything and everybody. He thinks everybody is on this earth to play with him,” said Boyd. His fan base extends beyond the shelter. Many have been following his story on Facebook and are inspired by his story and his spirit. “We had a woman that had severe arthritis,” said Boyd. “She just sees him and sees what he can do. She says it’s such an inspiration.”

The shelter volunteers are hopeful that Zeus will one day live a normal life, “We’d like for him to be able to walk, be able to run, play, do everything that other dogs do,” said Boyd. If you’d like to donate to help with Zeus’ recovery you can donate directly to St. Francis Community Animal Rescue through their website.