On June 26, 2014, Patchy the Pit bull and Bella the Shih-tzu, from Chicago’s south side, were pulled from a burning home and revived all thanks to quick acting firefighters and city paramedics equipped with pet oxygen masks. 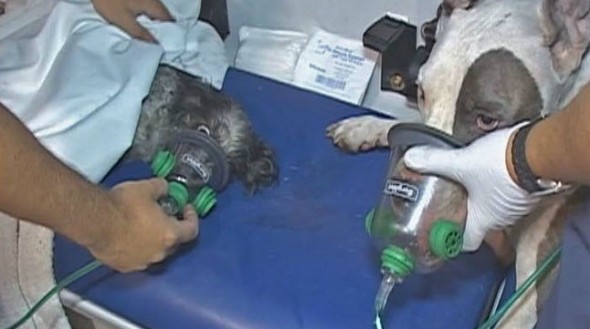 The fire started early morning on the 600 block of West 117th Place, but at the time of the blaze, the pet owners and house residents were not home. When they arrived, firefighters were already on the scene putting out the fire.

When the pet owners realized their two beloved pets were trapped inside the burning home, they rushed over to the hero rescuers and informed them the canines were trapped in the back room. Immediately fire rescuers worked to locate and pull the canine victims.

Patchy and Bella were unconscious due to smoke inhalation, but paramedics were standing by, ready to assist.

“We treat people all the time but to help animals it’s a great feeling, especially that they’re turning around for the better,” Chicago Fire Department paramedic Brian O’Keefe told NBC Chicago.

The two pets were unresponsive, but after a few minutes with oxygen treatment they started to turn around. They seemed frighten at first but as soon as the oxygen started to flow through their system their tails started wagging. It was obvious they welcomed the paramedics’ help.

Patchy and Bella were saved because the ambulance carries pet oxygen masks, without these, the dogs wouldn’t be alive today.