One of YouTube’s most popular animal reality series, Veterinarians On Call, logging over 100,000 viewers since its fall launch, premieres Season Two with two special stories: a paraplegic dog who gets around on a wheeled cart, and a veterinarian preparing abandoned cats for adoption.

The Season Two premiere on www.YouTube.com/VetsOnCall coincides with the 84th annual Western Veterinary Conference in Las Vegas, attended by an estimated 14,000 veterinary professionals from around the U.S. and overseas. 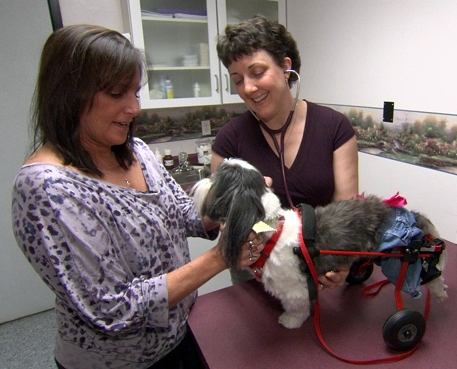 The Veterinarians On Call reality series captures U.S. veterinarians on the job caring for animals in clinics and hospitals, animal shelters, on house calls, and on farms and ranches – wherever they travel to provide care. The series so far has filmed 15 vets from across the country each whom volunteered to be filmed at work, in Massachusetts, New York, Minnesota, Iowa, Colorado, Texas and North Carolina.  The veterinarians volunteered to participate to attract more recognition for the profession, to help the public understand a vet’s role in caring for pets and livestock animals, and to inspire students to consider a veterinary career.

“Somewhere a young student will see our videos and be intrigued enough to follow our footsteps,” says Dr. Pete Ostrum, one of the most popular vets in the series in part because of his past as “Charlie” from the classic 1971 film Willy Wonka & The Chocolate Factory. As a young adult, Dr. Ostrum transitioned from “candy man” to milkman and practices as a dairy cow vet in upstate New York.

“It was actually fun to be in front of the camera again,” he said, forty years after the release of the classic film. Season two features new videos about Dr. Ostrum and other vets in his clinic, Dr. Deanna Fuller, Dr. Stacy Kenyon, and others.

Clint Lewis, President of U.S. Operations for Pfizer Animal Health, who helped to inspire the vision for this series, explained, “These videos help the public see the important role vets play in ensuring the optimal health and wellness of all animals — pets and farm animals. These newly released vignettes help pet owners understand the importance of preventive care and how it contributes to overall long-term health and well-being.”

New webisodes will premiere on the YouTube channel regularly over the next few months. The series is produced by John Courtmanche and Dan Carey with Essex Television Group, the Connecticut-based production company behind the popular Discovery Velocity network series Chasing Classic Cars.