Some animals, like people, leave bigger prints in your heart than others. But when a scruffy wire haired fox terrier named Louie Louie left this realm, there were more than paw prints in my heart, there were holes. Everything dies, I understand that, even more now that I live on a small farm, but the idea that Louie would someday be invisible seemed more fantasy than future reality. 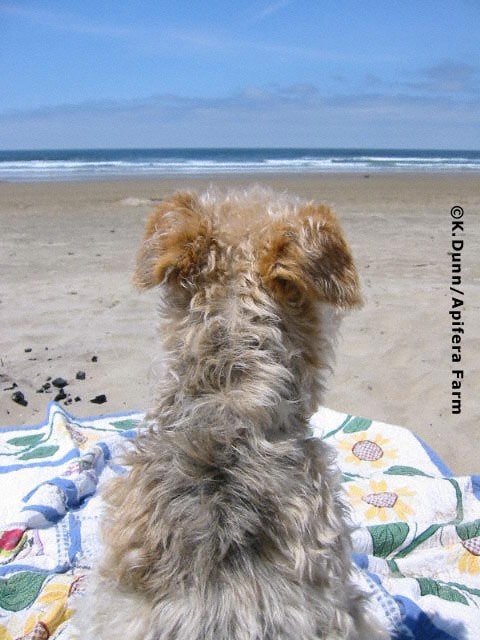 I use to have this irrational fear. When Lou and I would go on our annual spring trek to Colorado, always through our beloved Badlands, I would envision what might happen if I got into a car accident –  the ambulance would pull me out of the car, Louie would jump out or be left behind as I am rushed off in an ambulance, unable to speak or help him.  It never happened.

But after his death, I had similar irrational thoughts that he was somewhere, hurt or lost, afraid and wet, needing my help.

This dog could have had his own talk show or at least written a good memoir. He got out of a motel room once – by a maid’s hand – while I sat eating dinner in the motel cafe. As I went back to my room, I passed the front counter.

“Hmmm, that looks like Louie,” I thought. It was. As I approached, Louie was standing on his hind feet, front paws on the counter, his nose and beard just appearing over the counter as if he was ready to check in the next guest. The motel clerks were thrilled he had showed up, saying he had a natural smile and good attitude with strangers.  I always knew he had a knack for customer service.

They say you don’t fully accept a death until, after stages of grief, a new life comes along. Here on the farm, death walks side by side with birth, as a lamb is born the same day an older ewe dies.  It becomes more comfortable to think of death as just one stage of a cycle orchestrated by nature rather than a jarring interruption. The body is just the holding tank for a soul, one can ponder after death, and it goes on and on just like the water in the sheep trough overflows, meanders to the river below and lives forever in one form or another.

Louie’s going on and on too. Somewhere, I kept telling myself.

I still would rather have his curly head below my feet as I type, and get a glimpse of his face as I looked down on him, a look that needs no words because the eyes speak, “What are we doing next? Sure is a good day!”

I took him to the ocean for the first time. He probably could barely hear the waves, but as we walked on the beach, he trotted along like a kid, and as always, kept looking up at me every minute or so to say, “Isn’t this great?!” When I look at this photo taken that day, I can just feel his course coat, and see his whitened, blinding eyes looking towards my voice.

When I moved to Oregon and soon after our farm, Louie was already failing, blind and mostly deaf, loosing teeth, arthritic, and had had one minor stroke – but he was still present and happy. His ears still pricked when he – barely – could hear my voice and his silvering eyes still showed light in them. I told myself when he couldn’t play with his tennis ball – his absolute favorite activity  – I would know it was time.

After he quit playing with his ball, I still found ways to justify he was happy. And I think he was, but he was physically failing and I knew his death could come in the middle of the night and he would struggle. After witnessing animals suffer in death when a vet could not get to the farm, I vowed to give him a peaceful passing. The day I took him to be put down, he was so happy to be in the car. He was happy to see the vet. He was happy to sit on my lap. And he slipped off, warm, safe, loved…happy.

His ashes are still in the box that I picked up from the vet that day. I hadn’t intended to keep them. I planned to spread them on the farm he hardly got to know, so daisies could grow from him. I could pick them at will and wear them in my hat or just watch them playing in the wind and feeding bees.

But after eight years, I hadn’t spread them. It seemed safer to have him by the nightstand, in his little box with the lid closed, where I know he was dry from the winter rains and safe from irrational car accidents

“Where are you?” he might cry out to me, as his ashes scattered to the lower fields and skipped to the river. The thought of not being able to reach out to him and help, even if he was a box of ashes, haunted me.

But the farm has allowed me to partake in death many times, as observer but also as hospice worker and grave digger. I now know there is a peaceful space left after an animal dies. It is filled in time with new life and always holds memories and love from the creature that once filled it.

I spread Louie’s ashes near the front gardens where they entwine with both flowers, weeds and the ashes of many other animals from the farm. But when I toss the ball for my current dogs, Louie is right here with us.