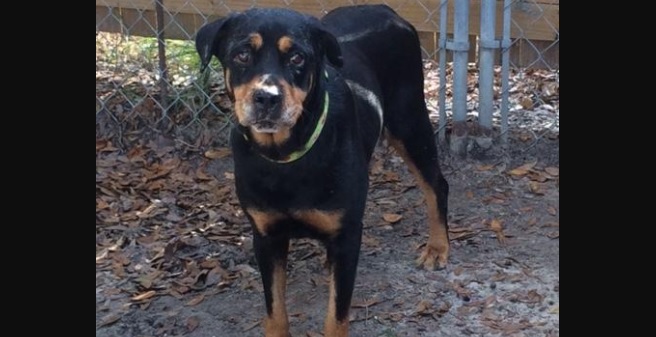 Pepper Jelly is definitely an interesting name for a dog!  She’s a seven-year-old, purebred Rottweiler, and she’s our LWD Adoptable Dog of the Day, today.  She’s described by her rescue, Poochie’s Pet Rescue in Hawthorne, Florida, as a very sweet dog with lots of love to give.  She is getting on in her years, and she will require a little bit of ongoing medical care, but we know she’d make a great addition to just about any family.

Pepper Jelly was heartworm positive, however she’s on the tail end of the treatment to rid her of them, and will only require a monthly pill for just a very short time.  Other than that, she’s in very good health.  When adopted, she’ll be fully up-to-date on all of her shots, she’ll be spayed, and she’s even crate-trained.

Pepper Jelly can be a little shy at first, however once she gets to know you, she quickly becomes a “little” (relative term…) love bug.  Her rescuers say that she’s a “medium energy dog” and is just as happy to laze about with you on a warm afternoon, as she is to go for walks or on any other adventures her humans might come up with.

Poochie’s Pet Rescue has also noted that Pepper Jelly has a non-life threatening genetic condition called vitiligo.  All that really means is that some of her fur is going to come through as a white color, instead of   the browns and blacks that make up rest of her coloration.  As mentioned, it’s painless and has never been known to be a threat, so really it just adds to her uniqueness.

Pepper Jelly would probably be best as an “only child.”  While she can get along with other dogs, it doesn’t always go very well, so it’s probably best to just skip that altogether.  Cats are also not a good idea.  While she seems to be just fine when it comes to getting along with the younger humans, she can get a bit “nippy” when she gets too excited.  It might be best for her to be around older kids.