In Lima, Peru, a pet owner hopped on a public bus and didn’t realize his dog named Ramon had followed him to the bus stop. The loyal and persistent dog ran after the bus for a few miles until he was allowed to ride the bus as well.

The video of Ramon chasing the bus was posted on YouTube by a bus passenger. The camera man spotted the pet running desperately after the bus and pawing at the public vehicle at different stops. The dog begged to be let in but the bus driver kept denying him access.

The video is approximately five minutes longs and it shows how Ramon came close to losing his life while he ran through heavy intersections and along side other vehicles. At one point, the dog can’t keep up with the bus and gets lost in the distance, but seconds later he resurfaces right along side the bus. 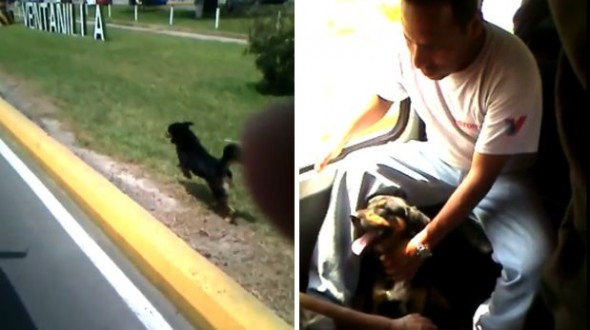 The man recording the event asks if the dog belongs to anyone on the bus, and after his owner is identified, passengers beg the driver to let the dog in.

Fortunately the driver agrees and the dog is reunited with his owner. The pet get a free bus ride too.