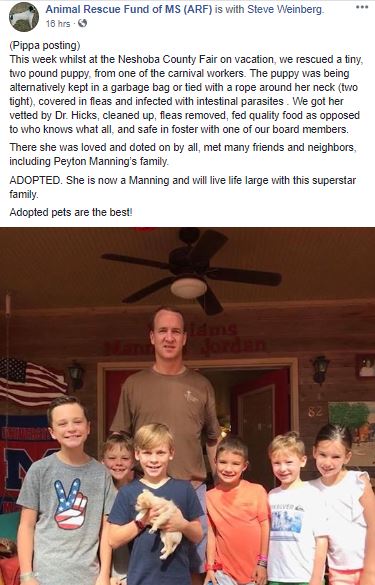 The tiny trooper began life as an abused puppy in Mississippi, but she’ll be spending the rest of it in the lap of luxury with superstar NFL quarterback Peyton Manning’s family.

According to the Animal Rescue Fund of Mississipi, the small pup was rescued from a carnival worker whom rescuers came across at a county fair where she was reportedly kept in, “a garbage bag or tied with a rope around her neck, covered in fleas and infected with internal parasites.”

Once vetted, she was cleaned up, de-flea’d and fed — all while being fawned over. Apparently, the Manning family spotted her, too, and decided to adopt.

“She is now a Manning and will live life large with this superstar family,” the rescue wrote on Facebook. “Adopted pets are the best!”