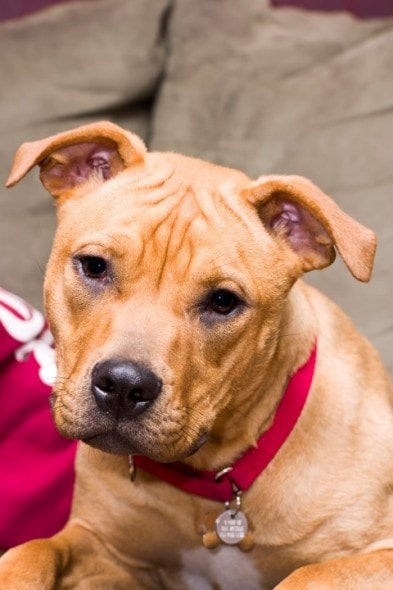 Versace, a sweet Pit Bull Terrier, has had a rough start in life but is now on the path to a better life, hopefully with a special forever family.  She was originally brought to a local pound as a puppy after being confiscated from her owner due to neglect and abuse. She was then rescued by 4 Luv of Dog Rescue, a no-kill rescue organization in Fargo, North Dakota.

When she arrived at 4 Luv of Dog, it was suspected that she had experienced some sort of head trauma and that something was not quite right with her central nervous system. An MRI confirmed this, indicating that she had hydrocephalus (water in the brain) as well as extra space in the folds of the brain, which appeared to have been caused by a combination of blunt force trauma and malnutrition.

As a result of these problems, she was displaying some quirky behaviors, such as always running in right hand circles. The volunteers at 4 Luv of Dog have really been working on these behaviors, though, in order that they do not become a set pattern. They have been working on running towards the left and other behaviors so that she can live a healthy life. In the end, it was determined that she should be able to perform at 70% capacity of normal functioning dogs.

Another very important challenge is to find Versace the perfect home. She knows her name and responds to simple commands but often reverts back to her “circling to the right” pattern, a consistent battle. However, when you watch her play with other dogs, you would never guess that anything is wrong with her.

Because of her condition, as expected, Versace is making slow progress with potty training, though she does keep her crate clean 95% of the time. Her fosters suspect that some of the delay is due, in part, to the excessively cold weather lately in Fargo, ND, where Versace is currently being fostered. Like most short haired dogs, she does not like to being out very long in the cold! However, she absolutely delights in being outside on warmer days.

Versace is searching for a home without any other high energy dogs since she is not 100% stable on her feet all the time. She loves to play with toys and her crate and does so nicely. The perfect home would consist of someone dedicated to helping her learn and guiding her through life so that she can have the best life possible. She has a wonderful personality and is a huge snuggler. 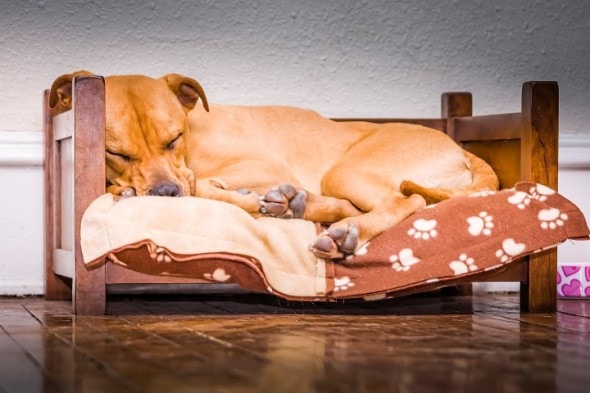 Everyone at 4 Luv of Dog is dedicated to helping Versace function at the highest level possible and to find her a loving and special forever home. A human took a normal life from her and now it is humans trying to restore that to her.

4 Luv of Dog Rescue is a 100% volunteer run, non-profit organization dedicated to rescuing and rehoming dogs. They are based in Fargo, North Dakota, and the majority of their dogs are in foster homes, with a few residing at their facility.

If you would like to inquire about Versace, feel free to email Jill at [email protected]