With the winter heating season underway, house fires are a common news topic, but the victim of a Pittsburgh apartment building fire says his experience was anything but common. 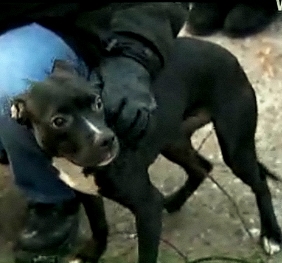 The three-story Sherman Avenue building went up in flames early Monday morning. Pittsburgh firefighters said the fire started on the second floor and spread quickly to the apartments above. Residents were evacuated before the entire building was engulfed. Most lost everything they owned.

“It’s overwhelming to think I lost everything, but I’m alive. I work two jobs. I’m 23. I work very hard for everything that I have, and to lose it this way is the worst feeling in the world,” said resident Randolyn McKinstry.

But another resident of the building said he could not be more fortunate: as the fire spread, Gary Terrell tells Channel 4 Action News reporter Janelle Hall that his seven-month-old pit bull puppy, Diamond, saved his life. He said that while he was sleeping, the young pup was distressed, and was barking for his attention. When Terrell did not respond, Diamond became agitated and did everything in her power to save him.

“I’m living testimony that a dog is a man’s best friend,” Gary Terrell told Hall. “She was barking, jumping up and down on the couch, on top of me. When I opened my eyes, I noticed there was a very bright light in my home.”

That light was the approaching fire, and Terrell says Diamond’s insistence saved both of them from the blaze.

According to Channel 4 Action News, the cause of the fire remains under investigation. Deputy Fire Chief Frank Large said there were no reports of working smoke detectors from those living inside the building.

Terrell said he’s just lucky he had Diamond by his side, and would not be here were it not for the dedication of his four-legged companion.

“They’re great dogs. I’m so glad I have her. I lost everything, (but) I have my life. I have my dog. And God will make a way for us,” said Terrell.