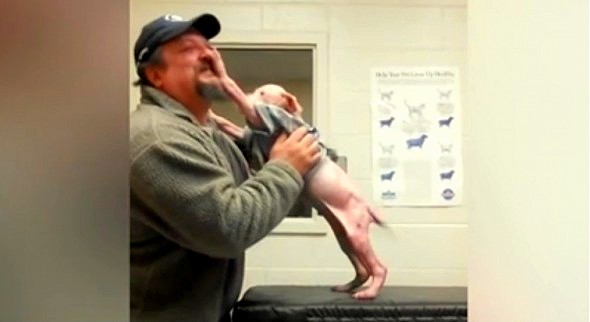 This pit bull puppy is finally being reunited with the man who rescued him, and could not possibly be any happier to see him again.  Mojo was so excited to see Joey Wagner to thank him for removing him from a life of misery and torture.

Wagner is the owner of Baie St. Marie Animal Shelter in Nova Scotia, Canada.  Two years ago, after noticing that the dog was in quite a bit of distress, he decided to investigate further.  Apparently the puppy was to be used as a bait dog, and had a horribly abusive life ahead of him.  That’s when Wagner decided to step in and save the dog’s life.

Wagner carried the dog out of his life of torture, and back to the animal shelter for some much needed TLC.  After undergoing weeks of treatment, doctors and nursing staff weren’t sure if the dog would remember Wagner or his heroic rescue.

Judging from the video, one would have to think not only did Mojo remember his hero, but was so happy to see him again that he covered the man in pit bull kisses!  It was one of the biggest shows of appreciation Wagner and staff can remember.

It would be safe to say that this animal lover has got himself a good friend for life – he later adopted the little dog who clearly chose the right person to be his family member!

“[Thanks] everyone for the kind words… Mojo is doing great.. lol.. snoring on the couch beside me… and yes he is spoiled, waiting for me to go to bed so he can cuddle between us,” Wagner said.  “He’s come a long way and his story has touched many lives from near and far. Mojo has also help[ed] with the building of our shelter and still continues to help so many others – not so lucky, lost, and abandoned animal[s] every day. You can see our rescue’s work at Baie Ste Marie Animal Society. Please like our rescue page and Mojo’s page… Hope for Mojo… and join us in continuing our work for the less fortunate and those who can not speak for them selves…

thank you again for all the kind words.”