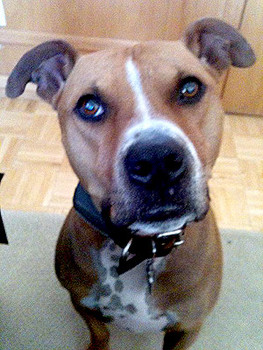 The O’Brien family of Brighton, Colorado is overjoyed after having their pit bull mix, Dre, returned after he was due to be euthanized.

“We are satisfied with the outcome of this case and that an agreement could be made that was in the best interest of Dre and his family,” said Jennifer Edwards, Animal Law Center founder and attorney.

The case started when on July 25, Dre and Doberman mix Machomotto escaped from an open garage door while Mary and Rick O’Brien were out doing errands.  Cautious neighbors notified authorities.  After that, what happened is disputable.

David Edelstein, leader of Team Pit-a-Full, a pro-pit bull group, relayed one account of the event:  “Neighbors reported ‘Two vicious dogs roaming the neighborhood’ when in fact it was just ‘two dogs roaming the neighborhood.’ The Dobie is quite shy and eventually wandered home. Dre was cornered by Brighton Animal Control and a few neighbors and growled/barked to defend himself. . . . The dog did not bite or lunge at anyone. The dog has no prior violations of viciousness or running at large or any other offense.”

In the Brighton Standard Blade, police spokesman John Bradley said it took several police and animal control officers to catch Dre, who was charging at people and attempting to bite them.  Machomotto was not aggressive, and was allowed to go home.

Brighton Animal Control kept Dre incarcerated for nearly a month.  During that time, online petitions gathered over 68,000 signatures demanding his release.  Supporters believed Dre was targeted due to his breed, but Brighton does not enforce any breed-specific bans.

The city hired a dog behaviorist who gave Dre a positive report, and four out of five of his charges were dismissed.  The remaining charge is likely for Dre running loose.

“This case has been followed by thousands of dog lovers around the world who will be relieved to know that Dre can finally return home to his family that missed him so much,” Edwards added.