Only a year ago, the four pit bulls in the van might have faced their final needle at the hands of Detroit Animal Control, but the city-run shelter is making genuine efforts to work with rescues. But since the replacement of its former director, and a host of improved partnerships, hundreds of dogs (nearly eight in 10 are pit bulls/pit mixes) have found new homes.

And that number is based on the rescues arranged through Detroit Dog Rescue alone.

The aforementioned dogs are instead headed to northern Michigan where they’ll enjoy life within the walls Kinross Correctional Facility. They will live with their temporary charges, inmates who will train them, before being put up for adoption to permanent homes. 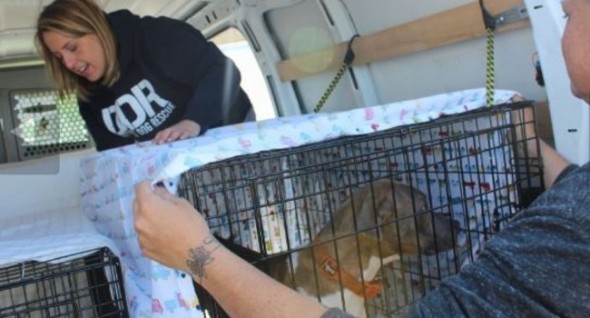 Henderson said the two-inmate teams spend 24 hours a day with their assigned dog, responsible for care and basic obedience training. Once the dogs are done with the prison stint, they could be ready for adoption.

A professional dog trainer donates her time in once-weekly visits to help the handlers along in their mission.

The program is popular; Henderson says there’s a waiting list for inmates who want their chance to train rescue dogs.

One such inmate, Keith Fischer, was part of the program shorty after it launched 2014, told the Sault Ste. Marie Evening News the impact of the animals goes beyond the handlers. He spoke of a fellow prisoner brought to tears just bending down to pet his dog, Tracker, while walking on the prison yard.

“Living with Tracker had its good days and its great days,” Fisher told the Sault Ste. Marie News. “There was never a bad day.”