A pizza delivery guy from Orlando, Florida was on a delivery not unlike any other he’s normally responsible for.  However, upon arrival to the delivery spot, he noticed a puppy being the victim of abuse and neglect.  He contacted Orange County Animal Services, and the dog was pulled from the home and the pizza guy is a true hero.

According to a press release, the pizza delivery guy was making a delivery to a home this past Sunday.  When he got there, he witnessed an injured puppy.  The person at the door claimed the puppy had sustained the injuries in a fight with a different dog while outside.

Animal services was called in, and removed the dog from the home.  It was found that even if the injuries were due to dog on dog violence, the humans hadn’t sought any treatment at all.  The injury could have resulted in an infection, putting the dog’s life at risk.

“Despite her injuries, Pupperoni (the dog’s new name) is still a friendly, outgoing pup seeking companionship and attention,” said Dil Luther.  Luther is the division manager of Orange County Animal Services.  “We cannot stress enough the importance of reporting animal abuse and neglect as these victims cannot speak for themselves.”

Pupperoni will be staying at the shelter he was brought to, and put up for adoption when he is healed up. 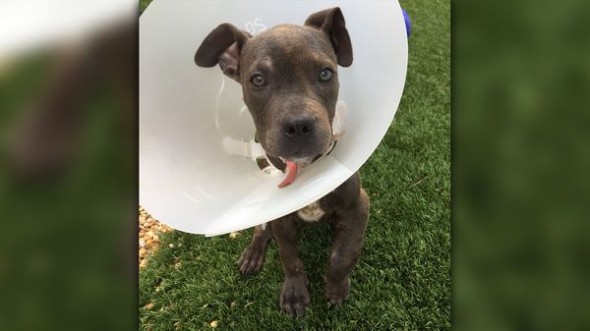