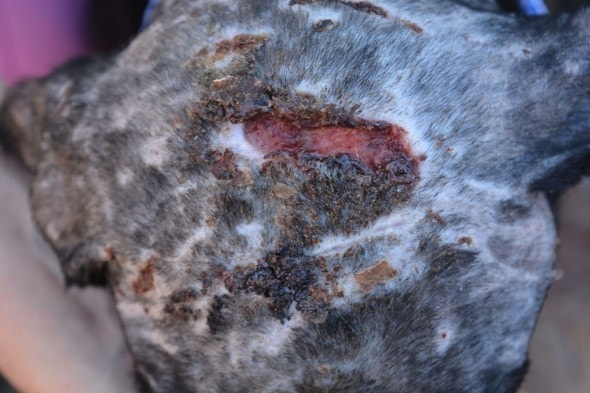 Below is a media release regarding a terrible dog fighting case.  It comes out of Holly Springs, Mississippi, and help in finding the suspects in the abuse/fighting case is being requested by local law enforcement.  One of the dogs involved that is called Chance was found near death, but was luckily rescued.  If you have any information at all, please use the contact info included. 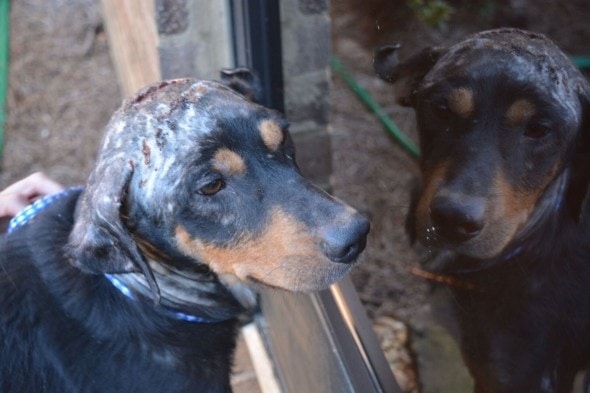 Holly Springs, MS (October 11, 2016) – In Defense of Animals, the international animal protection organization that runs the Mississippi-based Justice for Animals campaign, has announced a $2,500 reward for information leading to the arrest and conviction of the person or persons who may have sadistically used a Holly Springs dog as fighting “bait”.

On Wednesday, September 21, Holly Springs Animal Control Officer Rita Clay was summoned to remove a stray dog from the shed of a Holly Springs property on Salem Avenue. Upon arrival at the residence, a man told her there was a mangy dog in his shed and led her there.

Clay reported, “It was so dark in the shed I couldn’t see a thing. Finally we found the dog hiding under wood, metal, and boxes. He was terrified, and injured. As I got closer I saw that there were wounds on his head, crawling with maggots. I took him straight to Willow Bend Animal Clinic. I wasn’t sure if he could be saved. Luckily, after examining him Dr. Childers said he could treat him and he should recover, but it will be a long recovery.”

Willow Bend staff have named the sweet black and tan hound Chance. He has now begun his long road to recovery at the clinic.

In Defense of Animals is spearheading the campaign to seek justice for animals in Mississippi, and has joined the effort to determine what happened to Chance. In Defense of Animals’ Justice for Animals campaign director Doll Stanley visited the clinic and agreed with ACO Clay and Dr. Childers that Chance appears to be the victim of “baiting.”

“The severity of the injuries to Chance’s head are indicative of wounds inflicted by a dog who has been trained to kill,” stated Stanley, who has worked on dog fighting cases in Mississippi for over 20 years.

“Bait” dogs are used to train other dogs to fight. They are generally tied up or physically subdued so that they cannot fight back, then another dog or dogs are set upon them to use as practice. Dog baiting and fighting is a felony in the state of Mississippi.

In Defense of Animals is appealing for information that confirms that Chance was a victim of baiting and leads to the arrest and conviction of the person or persons responsible for this heinous crime. A reward of $2,500 is being offered through In Defense of Animals’ reward program.

Information that will help reunite chance with his guardian is also appreciated. Chance has a foster home waiting when he is released from Willow Bend Veterinary Clinic.

“This barbaric crime should be a concern to every citizen,” stated In Defense of Animals’ Justice for Animals campaign director Stanley. “Dog fighting is driven by “blood money,” gambling, and drags communities down with associated drug and even weapons dealing. The fact that dog fighting falls under one of Mississippi State’s few felony animal cruelty statutes speaks to the severe threat level it poses to society. Please contact us if you have any information that may help us find whoever is involved in this violent crime.”

Anyone with information related to this incident may contact In Defense of Animals anonymously at (415) 448-0048 or contact Holly Springs Animal Control Officer Rita Clay at (662) 544-1663. 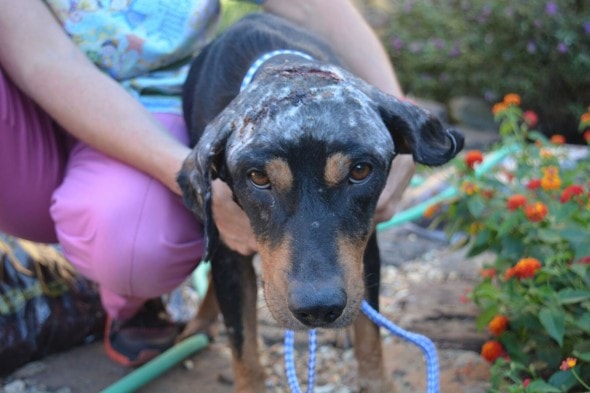 5 thoughts on “Please Help Law Enforcement Find and Shut Down these Dog Fighters!”