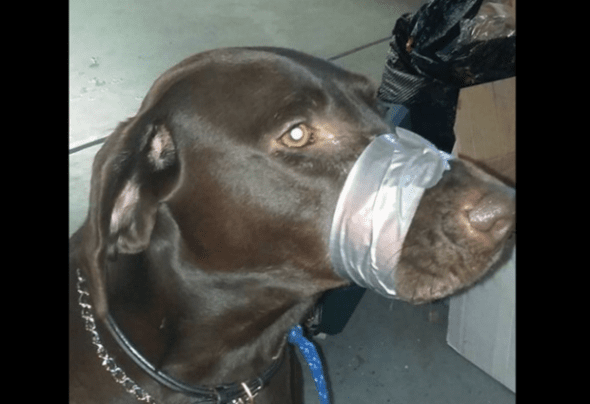 Police offices in Avon and Torrington, Connecticut and South Daytona, Florida have been flooded with phone calls from concerned people after yet another picture of a dog with their mouth taped shut has hit social media outlets.  The photo was taken and shared to Facebook, and has quickly gone viral.

The poster is said to be a woman.  She’s alleged to have taped the dog’s mouth shut for excessive barking.  The photo contains the caption, “This is what happens when you don’t shut up!!!”

What has been figured out so far, is the person responsible has relatives in Avon, Connecticut, and at one point was living in Torrington.  The police there have reported to the local news outlets that they have been flooded with calls on information regarding the photo.

The photo is not only garnering calls from Florida and Connecticut.  So far reports from police stations in 24 states say they’ve been contacted about the photo, and calls from Canada and the UK have come in as well.

Torrington Police Sgt. Gerald Peters said, “We’ve been working on it most of the day in conjunction with the South Daytona Police Department in Florida and also with Avon police.”  Sgt Peters said that the photo most likely didn’t take place in Torrington.

Police in Florida said the woman in question left Florida some 12 to 18 months ago.  They also say she has never lived in the city.

“Family members say she loves the dogs, she takes care of the dogs, but sometimes she does inappropriate jokes, and they feel that this is probably one of them,” said South Daytona police Lt. Dan Dietrich.  “If it is a joke, it’s a very bad joke, and it’s cost the City of South Daytona a whole lot of money and a lot of time to investigate.  I’m going to take a guess that now that somebody put her car and all of her information out there on Facebook, and that she’s probably going to go underground for a while.”