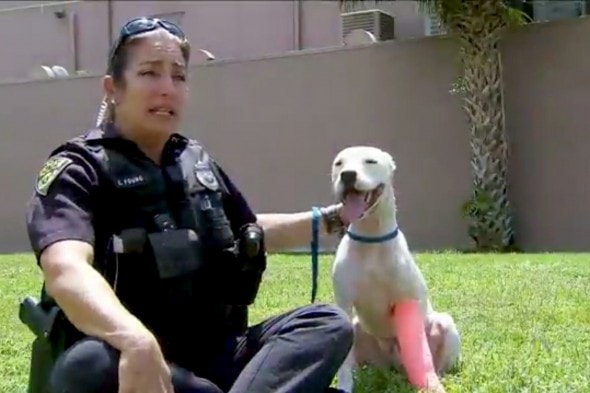 Officer Erin Young is a police officer in Florida, and also a big fan of dogs.  When she came across a dog limping about all on his own near a middle school in the town of Margate, she called animal control to come in and assist.  She spent about an hour waiting for help to arrive, and during that time, there was a bond developing.  Officer Young may not have known at that point, but her life was about to change.

According to officer Young, two people in the area claimed to be eyewitnesses to the dog being hit by a car.  Unfortunately, no one caught the license plate of the vehicle in question.  Regardless, something had to be done for this injured little guy.  The best course of action was to call animal control, then try to locate the dog’s humans.

Later that day, the dog’s humans were identified, and were told about what had happened. They informed animal control that they didn’t have the money to pay for any surgeries for the dog, and decided to surrender him to animal control.  After Officer Young found out about that, she knew she had to step in again.

“I saw him being walked and he had his little cast on, so I stopped to see how he was doing and they said he was going to have his leg amputated on Wednesday because the owners couldn’t afford the surgery,” she said.  “That just broke my heart. I didn’t want this poor puppy to lose his leg because no one would pay for it.”

That’s not all this wonderful person did for this dog. When she found out it was official that the dog was surrendered, she stepped in and adopted him as well.  She’s taken to calling him Tango, and the bond that developed while waiting for help to arrive, will have a chance to grow into a life-long friendship.

“I said that I would adopt him as well as pay for his surgery,” she said, adding that she believes fate brought them together. “I didn’t have to go help look for the dog, I chose to, and I’m glad I did, because it put us together.”