Two week ago, Anniston police officers Matthew Preuninger and Brian Scott were on patrol on the 300 block of Chestnut Street in Anniston, Alabama when they came upon a sight they were not expecting. They encountered a bait dog clinging to life. The officers stopped, rescued the dog, and rushed him to a vet. The injured puppy was later adopted by one of the officers.

Preuninger said that while they were driving towards the dog, they weren’t sure what they were looking at, but once they passed the puppy, they couldn’t believe what they had found. 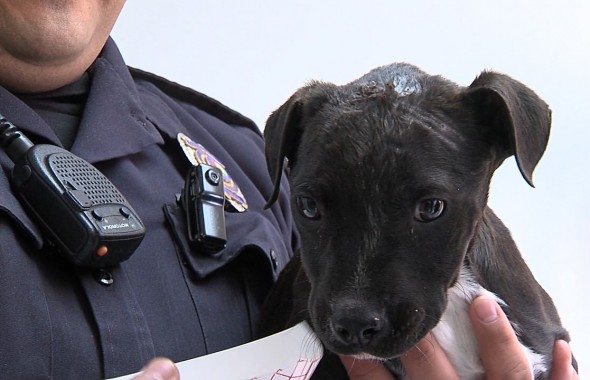 “It just looked weird. The closer we got the more strange it looked and when we passed it, I was like, wow,” Preuninger told ABC News.

The puppy was completely covered in blood and suffered from a swollen head due to sustaining multiple bite wounds. He was completely malnourished and needed immediate medical attention.

The officers rushed him to Anniston Veterinary Hospital where Dr. Tom Beam and his team helped stabilize the puppy and set him on the path to recovery.

When officer Preuninger’s wife learned of the puppy, she insisted on adopting the pet, and the dog’s rescuers couldn’t be any happier.

“I wanted him,” Preuninger said. “It was my partner’s and my responsibility to bring him here. I wanted to see him get the best care he needed and I wanted to be that one.”

Preuninger and his wife named the puppy Phil. He is now in a loving home where he will never again have to fight or endure any type of abuse.