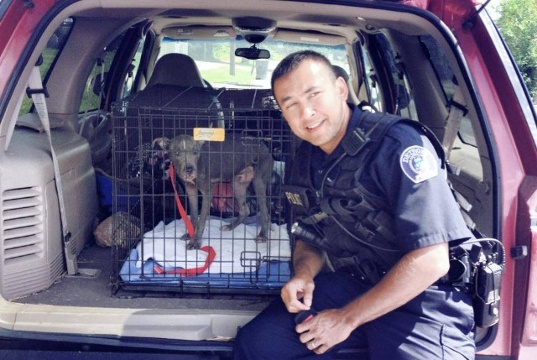 A puppy is getting a second chance after being rescued by a Detroit police officer Thursday afternoon.

Detroit Police Officer John McKee saw an animal rustling in some bushes late Thursday afternoon. He thought at first it was just a deer but he decided to take a closer look. That’s when he spotted a puppy hiding in the bushes.

The puppy was obviously weak and Officer McKee contacted the rescue group Detroit Bully Corps who came and rushed the puppy to a veterinary hospital.

“We immediately took the puppy to Emergency Veterinarian Hospital of Ann Arbor where x-rays revealed he was suffering from malnutrition and food bloat,” said Detroit Bully Corps Co-Founder Bill Bellottie. “His biggest hurdle is that someone gave him way too much food. We understand that people want to help, but it is dangerous to overfeed stray animals, especially when they are emaciated.”

The puppy, that has been named McGraw, weighs only half of what he should. He is estimated to be about a year old. McGraw will be up for adoption after he is recovered and has gone through the Detroit Bully Corps rehabilitation program.

Donations to help with McGraw’s care can be made online at dbcdogs.org.