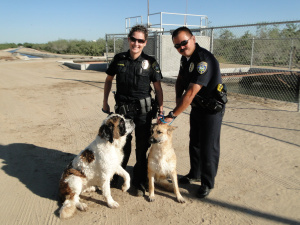 On Friday, two officers in Ripon, California were the heroes to two dogs that were stuck and on the verge of drowning in an irrigation canal.

A Good Samaritan spotted the two dogs in the canal and called for help. Ripon Police officers Mario Ysit and Mindy Morris utilized responded and used pole snares to pull the cold dogs from the chilly water.

Without the officers quick actions one of the dogs very well may have drowned. There was a strong current and both dogs were desperately trying to get out.

“The German shepherd was swimming around not attached to anything,” said Officer Ysit. “The larger of the two dogs, a St. Bernard literally had its paws wrapped around a pole.”

The German shepherd had worn down her nails trying to claw out of the side of the canal. Once out of the canal both were shivering and still scared from the incident. Both dogs were doing well otherwise and were reunited with their owner.