When Arlington Police Officers received various calls about a dangerous Pit bull roaming the streets they responded immediately. Thanks to their dangerous dog training classes, Sgt. Gary Carter and Officer Heather Gibson were prepared to deal with the “dangerous” pet, yet, when they met the dog, they realized the animal was not dangerous at all, he was just thirsty and tired.

When the police officers arrived at the last location where the white Pit bull had been seen, they clearly recognized the pet was dehydrated and needed help.

Officer Gibson lured the dog into the back seat of the patrol car using a protein bar, and as soon as the canine was safely inside, the dog wagged his tail and greeted the officers as if telling them “thanks for rescuing me.” 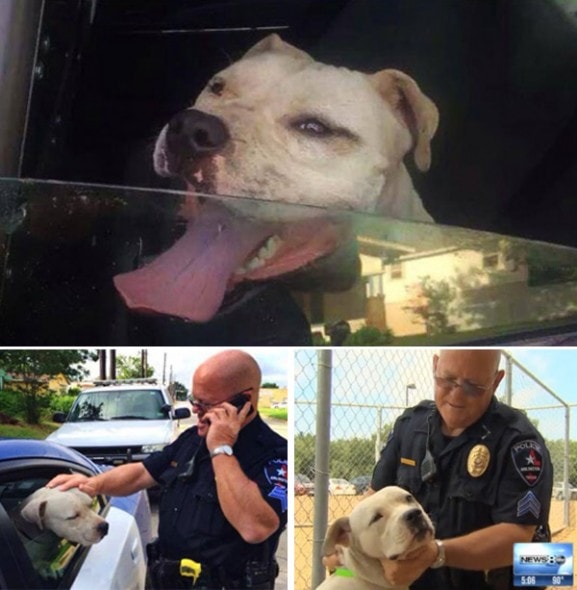 The canine was later taken to a shelter where he was scanned for a microchip. Luckily, he had one and it was registered to Antonio Mireles.

Immediately, the pet owner was contacted and he happily went to claim Jeffrey, his pet.

“I had been looking for him for days,” said Mireles.

Jeffrey had been recently adopted and had been going to work with Mireles, who works as a mechanic in a shop. The day the pet got lost, Mireles was working under a car and Jeffrey simply took off running. When Mireles was able to get from under the car and run after his dog, Jeffrey was nowhere to be seen.

Officer Gibson and Sgt. Carter are happy to have reunited Jeffrey with Mireles. They are also extremely happy the dog was simply a friendly pet looking for help. People tend to stereotype animals just by their breeds instead of taking the time to get to know the pets.

People fear Pit bulls because they are falsely known as vicious dogs, but we animal lovers know there are no dangerous dogs, just dangerous pet owners.