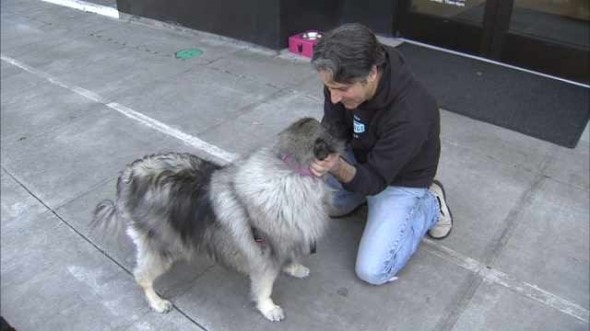 Francis Annala and his best furry friend Dutch have been driving truck over the road together for six years now.  Everywhere that Francis goes, so does Dutch.  When Francis and Dutch were separated from one another due to Francis needing emergency surgery that saved his life from an infection, a group of people from Portland, Oregon stepped up to make at the sure the pair were reunited.

Francis said it all started earlier this month, when for no apparent reason, he began developing a severe pain in his foot.  At one point things got painful enough for Francis to get himself to see a doctor even though he was far from home, and was given some very disturbing news.  He was told that he had developed a serious infection in his foot, and emergency surgery was going to be required to save it.

After hearing this, Francis’ first thoughts were not of himself, but of Dutch, and what could be done with him while he was in the hospital having surgery and recovering.  The truck they travel in is also their part time home, with a spacious cabin and full climate control and plenty of room for both of them to fit comfortably together.  The issue here was the hospital that would actually be performing the procedure that Francis required is about 1,700 miles away from their regular home and knew no one in the area at all to watch Dutch, which would leave Francis no choice but to leave him in the cabin of the truck by himself with the windows rolled down and plenty of food and water left out.  There wasn’t a lot of other choices to make, considering their distance from home, and they knew no one in Portland.

“He’s more important than the truck or anything else,” Francis said.  “That’s my buddy.”

In a stroke of good luck, it just so happens that a physician assistant at the hospital he was going to is also a volunteer with The Pongo Fund.  They are an emergency pet food bank that is based in Portland.

“He was very worried and I think I would’ve felt the exact same way,” said Sarah Silvernail with The Pongo Fund.

Larry Chusid, director of The Pongo Fund took a trip over to the truck, and got Dutch out of there before temperatures in the cabin could get dangerously high.  Even with food and water left out and the windows down, it can still not be enough to keep your dog from overheating or worse.

Dutch was taken out of a potentially dangerous situation, “to live in the lap of luxury” (pun completely intended) so to speak.  He’s been staying at the Sniff Hotel, which is a boutique doggy hotel in downtown Portland.  Hopefully, both can rest a bit easier now, knowing that the other is well taken care of.

“Dutch has spent the last few days in the lap of luxury at Sniff Hotel with a view of the city and his window points this direction, and his dad’s that direction so he’s really looking straight at his dad every day,” Chusid said.

Dutch was even brought a blanket that smelled like Francis by Silvernail.

Francis is very greatful to the folks at The Pongo Fund.  Without their help, he doesn’t want to think of what possibly could have happened to his furry best bud left all alone while he was in the hospital.

Francis is set to be released from inpatient care shortly, and will be reunited with Dutch once again thanks to The Pongo Fund.

“I’ll never say anything bad about Portland people,” Francis said.  “They stepped up and helped someone who doesn’t even live here, and that means a lot.”