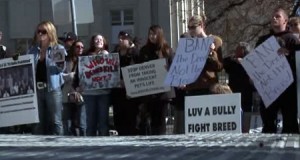 DENVER — Pit bull lovers from across the nation gathered in Denver on Friday to protest the city’s breed specific legislation, saying it doesn’t fit the breed and is bad for the city. Enacted after a 3-year-old boy was mauled to death and a pastor was gravely injured more than 20 years ago, the city’s ban is drawing unwanted national attention and heavy criticism from proponents of the breed.

Animal Planet is in town shooting an episode about Denver’s pit bull ban for its show Pit Boss.  “We’re killing the most lovable dog in the world because of stupidity,”  Shorty Rossi (Animal Planet host) told the crowd of protesters.

In March, Denver’s pit bull ban and the ADA’s allowance of using pit bulls as service animals are expected to be heard in court.