Scribbling three letters—“P.T.S.”—is the first step in the process. Think of it as marking a big, red “X” on their I.D. card, clipped to the outside of their cage.

I walk from kennel to kennel, sometimes overrun with 12-15 dogs and identify whose time has legally expired. After a quick inspection I give a nod to my assistant to write the acronym that sentences them to death, PTS or “Put To Sleep.” 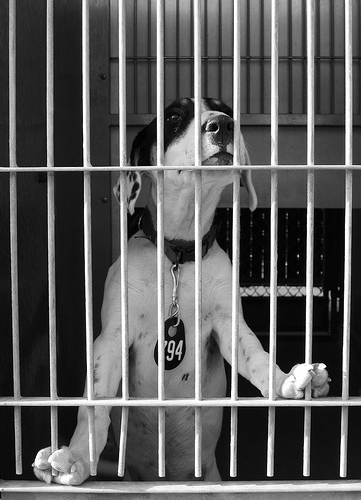 This is a daily ritual for me as the new County Veterinarian. Our shelter is over populated with hoards of unwanted dogs and cats…

My first week I remember holding Minnie, an overweight fluffy, white poodle that once knew the comforts of a family and home; then Jasper, an affectionate, green-eyed, tabby cat whose owner was forced to give him up because of a home foreclosure.

Regardless of the story, the majority of them will live out their required five day holding period in a steel cage only to have PTS stamped on the outside.

When I left my posh position in Orange County to pursue this opportunity I had no flippin’ idea (a different f-word would be more suitable). Call me naïve or ignorant, but the unadvertised truth, the truth that isn’t discussed at the water cooler: There is a very ugly side to animal welfare in this country, the proverbial “dirt under the rug.”

For 11 years I had practiced the brand of small animal medicine you dream about in vet school. The kind where the sweet, old lady with the bottomless bank account brings in her pampered lap dog and readily complies with anything you recommend. It’s rewarding and comfortable. With few exceptions the owners are appreciative and respectful. You have an arsenal of diagnostics and treatments at your disposal…and the pay is fabulous.

At the expense of sounding dramatic, my new post is something of an apocalyptic movie—the opening scene with sunshine fades to a Terminator-like, black sky.

In short, I was not prepared for this.

The fabricated world I had been working in ended abruptly in the spring of 2008. My duties were not explained to me. Stanislaus County had been without a shelter vet for nearly three years. Additionally, they have one of the highest euthanasia rates in the entire country. And so when I arrived my learning curve was steep.

I set my own mandate and jumped in: Perform as many spays and neuters as possible, care for over 400 animals on site including the numerous HBC’s (hit-by-car), dog fights and sick cats and in my free time write County policies and procedures.

Our shelter is over 35 years old. The paint is worn and the concrete cracked. There are few windows and, like a prison, it’s enclosed in old barbed wire fence. It has the smell of rust, mildew and faint sewage, much like a dilapidated, public restroom. Additionally, California’s Central Valley, a rural farming area, where I now lived was no Disneyland. It was hit hard by the recession with high illiteracy and unemployment rates to boot. The public had a perception that I was a lowly pound vet and many castigated me as a death dealer rather than a healer. By sharp contrast, I could smell the ocean and hear the sea gulls from my old hospital.

But in the very beginning the facility, the environment and the mass numbers of pets destroyed everyday hadn’t really affected me yet. Not like I was expecting anyway. Maybe like being thrown into a war, you go into survival mode. I allowed myself no time to become distraught or feel. I stayed objective and focused. The only indication of any emotional distress was a disturbing dream that woke me one night:

I walked down a long, seemingly endless, corridor of kennels. In front of each cage I would pause just long enough to give my technician the order to write PTS on their card. Every cage or kennel housed a healthy pet—nothing injured or sick. Instead, the cats and dogs I saw were energetic and fluffy; every one was wagging or purring, coming up to greet me, just begging to be held. The building stretched the length of a football field until I came to the last kennel, exhausted but stone faced. Sitting before me was my own dog, Belle, a Doberman I had owned 10 years—my baby. My assistant stepped up with her red pen and in slow motion wrote P. I yelled at her to stop but she continued. T. I grabbed her arm but mine moved through hers like I was a ghost. S.

There was a second, brief moment that also gave me pause. This was not a dream: I rose from my desk and began to walk towards her kennel. She was a gentle, white, Pit Bull mix with bright, blue eyes. She had been under my care, in the hospital, 10 now days for the treatment of bite wounds.

Every time I’d come within three feet of her she’d become so overly excited she couldn’t contain herself. She would lick the bars on the cage and wiggle her rear wildly, like a fish flopping on the shore. No matter my mood, it would always make me laugh. She thought I was coming to feed her or pet her. Not today. I walked to her cage and wrote those familiar three letters. As I walked away, careful not to look back, a lump formed in my throat.

But the dream was soon forgotten, as dreams are. The moment with the hospital dog was lost. And I continued on. I continued on until one day hit a little closer to home and my attitude changed forever.

She could fit in the palm of my hand and weighed less than a wallet or set of keys. Her eyes were so crusted with thick discharge I couldn’t peel them open and she had clearly been starved for days. She was suffering. I immediately gave the order to euthanize her but at that very moment, to our surprise, she blindly crawled to her food dish and began to eat. My tech looked at me for reassurance. “Yes,” I repeated. “Let her go.”

This morning alone, I had already seen 15 kittens in similar condition. All of them were euthanized.

She reached for the syringe and prepared to inject her…when I got a sudden impulse to call my girlfriend.

“Hey, we have a sick little kitten here that we’re about to put down. She looks like a Siamese mix and she’s cute. Any interest in taking her home and treating her?” I paused. “You need to be quick. She’s about to go.”

My tone was casual and not urgent at all despite the urgency of the moment.

I poked my head back in the door. “Brandi, don’t do that one.” Brandi was seconds away from ending her life.

I brought her home that evening and put her on a regiment of antibiotics and TLC. She was a hardy cat. Most kittens completely lose their appetite in the face of such a severe upper respiratory infection. Not this one.

When the infection had finally calmed enough for her eyes to open, they were swollen and blazing red. She had deep ulcers on her cornea and I thought her vision would never be normal.

Throughout the process I cautioned my girlfriend and young son not to get attached. Even if she did make it through the illness she had to go back to the shelter. Meanwhile, someone else was slowly getting sucked in.

Truth be told, I am not a cat person. Just like any other pet owner, vets have their favorites, too. My favorites are dogs, big dogs. But every day this cat survived, every day she defied the odds, a newfound respect began to blossom.

After weeks of therapy and living in my garage she was finally big enough and healthy enough to be returned to the shelter.

My girlfriend looked at me as I began to gather all of her treatment supplies. “I think we should keep her,” she said.

I tried to play the tough guy part. “No. We already have Princess. We don’t need another. Are you going to take care of her?”

Inside I was smiling. “Fine, we’ll keep her.”

Today she is my cat, big and beautiful. She cries for me in my absence and loves to perch on my shoulders first thing in the morning as I get ready for work. My girlfriend comments that she has never seen a cat show such devotion and often jokes she’s jealous of my “other woman.” We share a special bond and she is a true testament to survival. But, as I’ve come to realize over time, not really unique.

What she taught me is every pet that passes through the shelter is special. Every cat and every dog have the ability to heal with an endless capacity to love. The faces that were once random and empty now seem they could every bit be…my little Sushi.

My mission is now set and the fire has been lit. Rather than a robot armed with a degree, I’ve become a voice for those that cannot speak. She has charged me with the responsibility of giving every life a personal touch, whether it ends as a PTS or not.

Who would’ve imagined 8 ounces of ears and matted fur could’ve influenced such a colossal change.

The shelter isn’t pretty and the smell still gets me some mornings. On occasion I have to tuck away my feelings and some days wear me out more than others. But the little secret is…the one I seldom disclose… 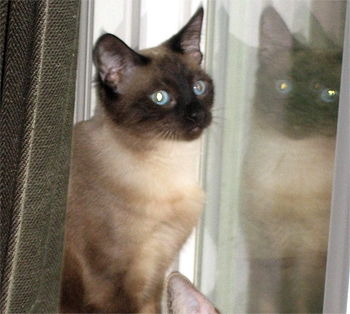 …and once while Sushi lay draped around my neck, soon after I had claimed her as my own, I whispered a promise to her, “Every animal I can save, I will.”