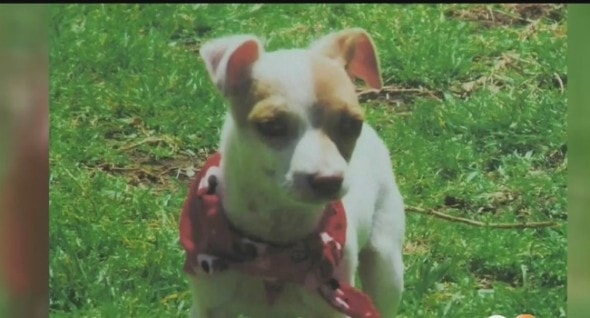 When police in Orange County found Bubba in a Tustin motel room with a drug offender, they knew something wasn’t quite right. Turned out the small terrier mix was high on both heroin and methamphetamine. Officers arrested Bubba’s owner, Joshua West, who was charged with drug possession and animal cruelty — and Bubba was put into detox.

“I would say looking at his video today, his prognosis is excellent,” veterinarian Matthew Wheaton at the Alicia Pet Care Center in Orange told CBS Los Angeles. “I think that if he can avoid being exposed to additional drugs in the future with his new forever home, things are going to be perfectly fine.”

In fact, the officer who took Bubba into custody paid him a visit recently, and a video of the interaction shows a happy, appreciative little Bubba greeting his rescuer.

“Bubba looked very healthy and happy,” read a post on the Tustin Police Department’s Facebook page, “and both he and Officer Laurich seemed to thoroughly enjoy their time together. Per Assistant Director Katie Ingram, Bubba has adjusted very well and is one of the staff favorites. She also said Bubba is very social, and has multiple rescue groups waiting to take him when he is released. Bubba is estimated to be 5-6 months old.”

Wheaton expressed uncertainty about Bubba’s level of intoxication: “It’s hard to know because you see the dog now, and it’s doing so great that ‘lethargic’ for that particular dog might have actually [meant he was] pretty messed up on drugs.”

Sadly, he sees more and more dogs coming into his animal hospital high.

“They’ll go really really high, and then they’ll kind of have that crash. So there might have been a lot of neurologic stimulation going on with the dog that really was, at the end of the day, kind of short-circuiting things.”

Five rescue organizations are in line to take care of Bubba and at press time 15 people had already signed up as potential adopters. He will be available to find a forever home once the Orange County district attorney files formal charges against West, Bubba’s owner.