The battle rages on for Detroit shelter pup-turned-Internet-sensation Diggy and owner Dan Tillery, who got a bit of good news this week, a bit of evidence they’ll be able to present in court when the time comes.

You may have heard of Diggy or, more likely, seen his adorable adoption photo, which went viral after Tillery posted it, delighted after he and his girlfriend, Megan, took him off Detroit Dog Rescue‘s hands on June 6. But the joy wore off quickly when officials in Waterford, where Tillery lives, got calls about a “pit bull” moving into the neighborhood.

A township ordinance prohibits any person from owninga pit bull; a violation can result in a civil infraction and a fine of $500.00.

A recent post to Detroit Dog Rescue‘s page noted that official papers from a vet declaring Diggy to be an American bulldog had been presented on Tillery’s behalf.

“This morning we submitted documentation from a Waterford veterinarian stating that Diggy appears to be an American Bulldog,” the post read. “We were told the paperwork would be directed to the township prosecutor. Diggy’s owners and our organization arranged to meet with the prosecutor in an infraction conference and the city will determine the date. However, we are sincerely hoping that after a review of even more paperwork stating Diggy is indeed an American Bulldog, a decision will be made sooner than the infraction conference.” 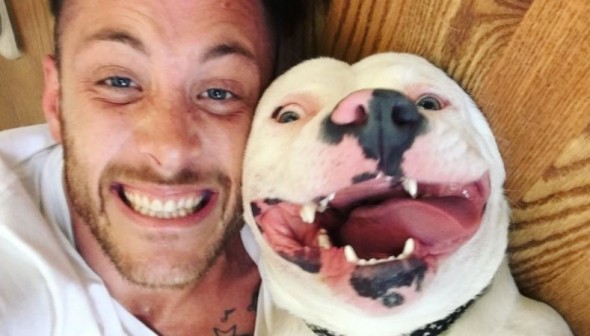 The police issued a statement, as well:

“Tillery will have an opportunity to present to the court, confirmation from a licensed veterinarian indicating the actual breed of the dog. The court will make a determination regarding the validity of such confirmation.

“We recognize the emotional and passionate views of people on both sides of this issue. The Waterford Township Police Department is tasked with enforcing local ordinances and we have done exactly that in this case.”

The story, which has exploded in cyberspace, has even drawn comment from the Humane Society. The following is excerpted from a June 13 letter from Cory Smith, Companion Animal Public Policy director:

“Breed-specific legislation is an ineffective animal management strategy that has failed everywhere it has been tried, and we strongly urge you to repeal your breed-based ordinance provisions. As is becoming evident in current headlines, breed bans are inhumane policies which do nothing good for communities but take dogs with clean histories away from families who love them. Sound community management of dogs has nothing to do with breed, and Waterford will benefit from making this positive shift….

“Waterford could benefit from a stronger set of dog regulations to manage dog behavior on an individual basis rather than pouring resources into an unenforceable and unrealistic set of rules targeting dogs by breed.”

Diggy spent roughly 100 days at the shelter before being adopted.