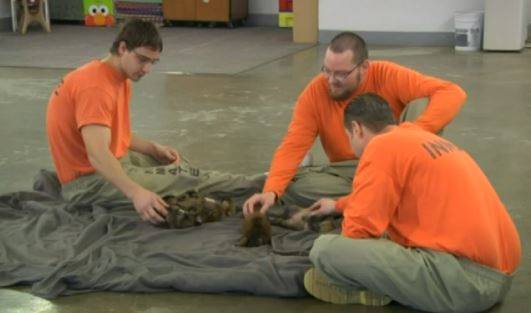 Back in January, these six little puppies had been tossed in a trashcan and left for dead.  Flash forward to now, and they are all headed to new forever homes.

Thanks to a program involving the Sioux Falls Area Humane Society and some inmates at the South Dakota State Penitentiary, there has been someone making sure their transition into new homes will be as smooth as possible.

“It started terrible as we all know,” said South Dakota State Penitentiary Inmate Lance Przybylski.  “When we first saw them, they were a week old and had just been discovered after being thrown away in the cold.”

As soon as they were rescued, they were put into the Paroled Pups Program at the state’s prison.  While there, some inmates learned about what it’s like to have real responsibilities, and how to take care of someone, and the pups got 24 hours a day seven days a week care.

“We were just looking at a picture of how small they were before, and it’s just incredible how big they are and healthy.  For example, this guy here, he’s a little bit more aggressive than the others. He’s kind of the bully,” said inmate Przybylski.

So, after raising them for the past two months, they are ready to say goodbye to their charges, as they make the next step in the journey of life.

It’s going to be tough to have to watch them go.  But just minutes into being back up for adoption, they found loving forever families.  Also, the inmates get to meet their new charges.  A new crew of pups were brought in, and the inmates get to start the process with a whole new set of furry friends.