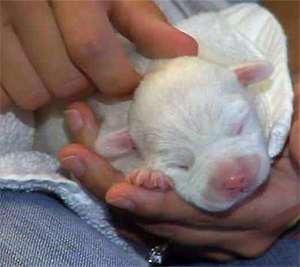 Chelsea Adkins says she still feels rage when she remembers the events of last Sunday. “It does disgust me. I cried. It was really heartbreaking,” she says.

Adkins and her husband were taking out their trash last Sunday evening at their West Carrollton, Ohio apartment complex when they say they heard unfamiliar noises coming from a trash bag in the bottom of a dumpster. Digging through the refuse, they made a heartbreaking discovery – a newborn puppy was desperately trying to escape the bag she had been sealed in.

“We took the trash bag out and went through it. She was on the bottom, covered with food, beer bottles, and some of their mail,” said Chelsea in a interview with WDTN2.

Adkins and her husband said they could not begin to comprehend the cruelty the dog had been subjected to. “People are evil. I don’t know how anybody could do that, especially to a baby, a newborn. She can’t even see yet,” Chelsea said.

After bringing the pup home, they cleaned it before rushing it to a vet. Such was their concern that they sought a second opinion, then a third. All three vets assured them that despite her rocky start in life, the dog in their possession was not ill or injured – she was just unwanted.

Chelsea said she and her husband had no plans to get a new dog, but after all it had been through, they wanted to know that this puppy would never feel unwanted again – so they are adopting her.

We’re in love with her,” she says, pausing to admire her new family member. “We can’t get rid of her, especially after taking care of her.”