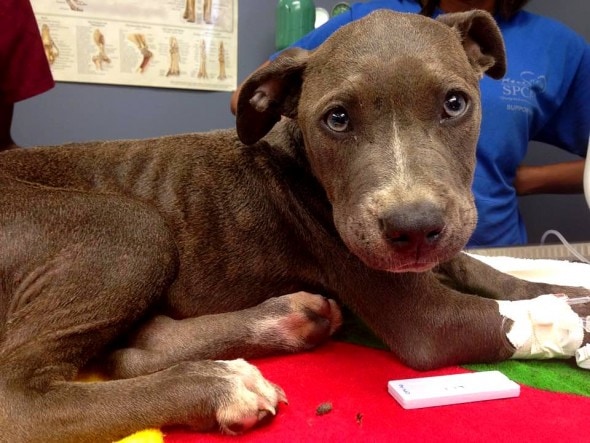 Earlier this month an adorable four-month-old pit bull puppy was heartlessly stuffed into a duffel bag and abandoned on a scorching hot day in Chester, Pennsylvania.  But now she has recovered from various ailments and is ready to be loved forever.

The Delaware County SPCA received a call from an animal control officer about a dog who was found inside a bag left next to a park bench.  It was very hot outside, and the puppy, called Duffy, was nearing death.

“Her temperature initially was 105 degrees.  Normal temperature for a dog should be about 101, 101-½,” veterinarian Gia Croce told Fox 29.

A couple degrees higher and she would have died, especially being so thin.

“She does appear underweight, particularly if you lift her skin, it’s very, very thin, and kind of holds that tenting appearance, which really means she’s very dehydrated, and you can also feel her vertebrae very easily,” Croce continued. 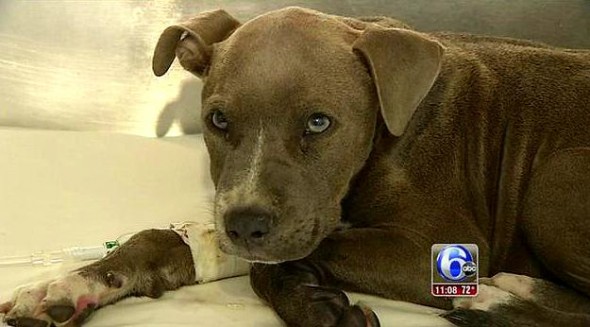 Tests also revealed that she was suffering from the life-threatening parvovirus, which may be why she was left to die.

“Not only is it a sin, but it’s also a crime to do something like this. It’s punishable underdog law in Pennsylvania,” the SPCA’s Justina Calgiano told 6 ABC Action News.

“What we really want people to know is this shouldn’t even be a last resort. This should not be an option at all.”

The total cost of her care is estimated to be $3,000-$5,000.  If you would like to donate towards her care, please click here.  From the drop down menu, select George & Friends Fund, and specify in the “special notes” section that the donation is for Duffy.

Fast forward two weeks, and the puppy is recovering nicely.  Police are still searching for the person(s) responsible for her neglect and abandonment.

If you are interested in giving Duffy – or any of their other wonderful animals in need – a home, please click here.