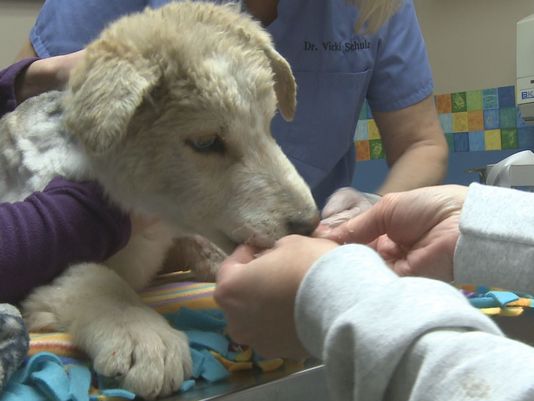 In Bloomington, Minnesota a puppy has been rescued from a burning dumpster.  Now called Phoenix, he’s recovering at the South Hyland Pet Hospital after initially being brought to Red Lake Rosie’s Rescue.

Phoenix is only five months old, and even though he’s been through some serious trauma, it’s expected he will make a full recovery.

“I think he’s got a really good chance of being okay. There are always secondary unfortunate things that can happen,” said Veterinary Doctor Vicki Schulz of ACT V Rescue and Rehabilitation.

Schulz stated that Phoenix was found by Clayton Van Wert at a dump on the Red Lake Indian Reservation.  Leech Lake Legacy had transported him to the animal hospital where he’s receiving much needed pain management and TLC.

“Thanks to some really resourceful people from other groups and Red Lake Rosie’s, and somebody who likes transporting emergency animals, he got down here the next day. I think that made a huge difference,” said Schulz.

Anyone wishing to help can find out more about Phoenix and his recovery process by going to ACT V Rescue and Rehabilitation’s website, or by clicking here.  On the site, search for “For Phoenix” on the page to donate, or find out about availability for adoption of Phoenix, or any other dog looking for a forever home.