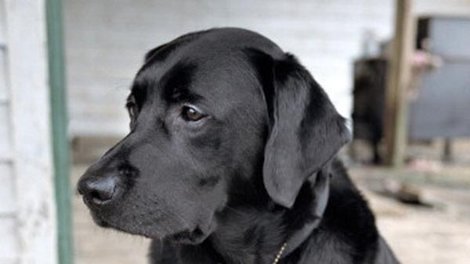 After spending more than 15 minutes administering mouth-to-snout resuscitation, firefighter Mike Day brought an unconscious 5-month-old black Lab puppy named Loki back to life. This is the fourth such rescue he has made in his 23-year career “and all four have made it back,” Day said.

The pup was caught in an apartment fire that he started when he jumped on the stove and accidentally turned one of the burners on.

“The owner tossed a bag of dog food on the top of the stove, put the dog in his kennel but didn’t get it latched correctly and the dog got out, climbed up on the stove and inadvertently turned the stove on and it caught the bag of food on fire,” Mike Day explained.

Firefighters arrived at the Wenatchee, Washington apartment and kicked in the door, looking for survivors. No people were home, but they found Loki unconscious on the floor and immediately handed him to Day.

“He wasn’t breathing, but he had a pulse,” he said.

He clamped his mouth over the dog’s snout and worked his magic.

“It took a long time, it seemed like forever, but he finally started breathing on his own,” Day said. “I didn’t think he was going to make it, but dogs are tough.”

Owner Chris Cummings and his eight-year-old son Caden may have to find a new residence, but are just happy to still have alive the dog that Cummings calls “my second child.”

“He doesn’t have the dexterity to keep himself upright yet and he’s coughing a little bit, but he wags his tail when I talk to him,” said Cummings. “He’s got a long road to recovery, I’m sure, but we’re keeping faith.”

He is eternally grateful to Day’s heroic endeavor; not many would make such an effort to revive someone’s dog.

“I’m overwhelmed,” Cummings said. “This was above the call of duty — so far above and beyond.”