James, an eight-week-old puppy that was stolen from the San Francisco SPCA Adoption Center on Tuesday, November 8, was discovered and returned on Wednesday. James was returned healthy and unharmed—and happy to be back. 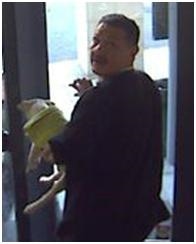 James was returned by a woman who purchased him outside of a Safeway grocery store. She later learned of his abduction from the SF SPCA from the substantial media coverage that ensued. The SF SPCA is grateful to the media and the public for putting such a heart-felt effort into James’ return.

The theft occurred shortly before James was scheduled to go to his new adoptive home. Fortunately, just a few hours after being returned to the Adoption Center, James finally did go home with his new adoptive family.

The suspects are still at large. According to SFPD report number 110-902-526, they appeared to be a Latino couple in their 30’s who were in the company of a four- to six-year-old boy with dark hair. The three were seen driving an older white Sedan, possibly a Honda Accord or Toyota Camry.

Anyone with information about this incident is asked to call the Sergeant Pete Shields at the San Francisco Police Department at (415) 558-5400. The police report number is 110-902-526.