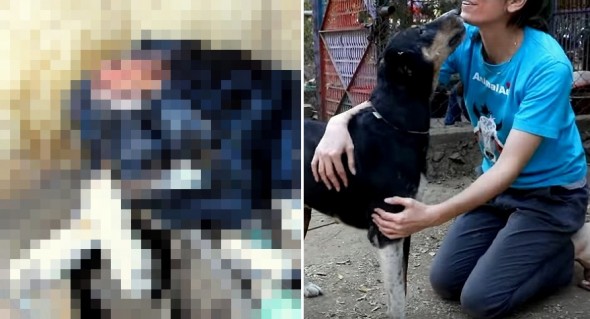 WARNING:  This article contains extremely graphic content that may be too disturbing for some viewers.

We see so many true horrors on a regular basis – whether real or in movies – that it is easy to become desensitized to them.  But this story is truly astounding.  This puppy’s head was torn open from ear to ear, and it is through the remarkable dedication of Animal Aid Unlimited that he has been saved and is healthy and happy today.

It is unknown how he came to be in such an intensely shocking state, but it seems unlikely that an injury so severe could have happened because anything other than malicious intent.  However, it is possible that it simply was the result of an injury from a fight with another dog that became infected, and was made worse by an infestation of maggots who ate healthy tissue as well as necrotic (myiasis).

The dog, called Cubby, sought refuge in the darkened corner of a small hovel, where he surely would have died a slow and agonizing death.  The AAU team cleared away detritus that was blocking their path to him, and using a blanket, gently scooped him up and rushed him to their site for emergency medical treatment.  He was sedated, and then the process was started to clean out the wound and remove the maggots.

The wound was then padded with gauze, which was changed regularly.  After eight weeks, the gash healed, and Cubby’s gratitude for his improvement shone through like a beacon on a foggy night.  He adores giving paw and showering his saviors with well-deserved kisses.  His exuberance and affection are a true testament to the tremendous team of Animal Aid Unlimited.

If you would like to make sure that they are able to continue saving animals who absolutely would die without their help, please click here to donate.