Does your dog like to dig in their  yard?  Some dogs seem to be quite enthusiastic about this little pastime, often to their human’s chagrin.  No matter how many holes your dog actually manages to make, you never expect  them to find any “buried treasures” out in the yard.

Smuckers’ and her human, Tom Unterwagner, what started off as simple hole digging has made them heroes of a sort.

“It turned out to be a great hole she dug that day,” said Tom  “It was meant to be.”

While Smuckers’ went treasure hunting one day, she actually did find something.  It was a purple heart which is a medal given by the United States military to honor soldiers wounded in actual combat.

Tom went to work along side his friend Steve Jankousky immediately in an effort to figure out who the medal belonged to.  They called everyone in the phone book with the same last name as the one on the purple heart, searched online and did everything they could think of in an effort to get a hold of whoever it belonged to.

“It sat in that little cup on my desk for a decade and I just really never thought that I would reunite it with the family,” said Steve.

After hearing about a program out of Vermont called Purple Hearts United only very recently, Tom and Steve contacted them straight away.  After contacting Purple Hearts and talking to Captain Zachariah Fike, it was decided Fike would come out to them and get some news coverage on the search.  The hope being either the soldier or their family would see it, and respond.

“Shortly after the story aired, within a couple of minutes, 15 minutes, we got a call from his daughter,” Capt. Fike said. “She had all of his military paperwork and she shared that with us.”

Needless to say, it worked.  The purple heard medal was given to family members of vet it belonged with.  Leatra Plick is the daughter of the serviceman the medal was awarded to, which was something she never even imagine in her wildest dreams.

“It’s like I’m holding a piece of my dad, you know?” said Leatra.  “It all comes together.”

To learn more about Purple Hearts Reunited, go to their Facebook page by clicking here.  You can also go to www.purpleheartsreunited.org, or just click here. 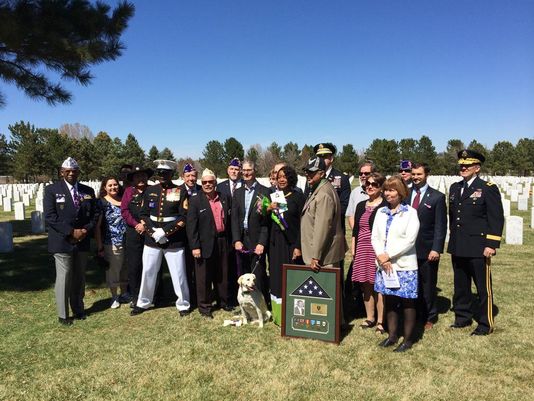