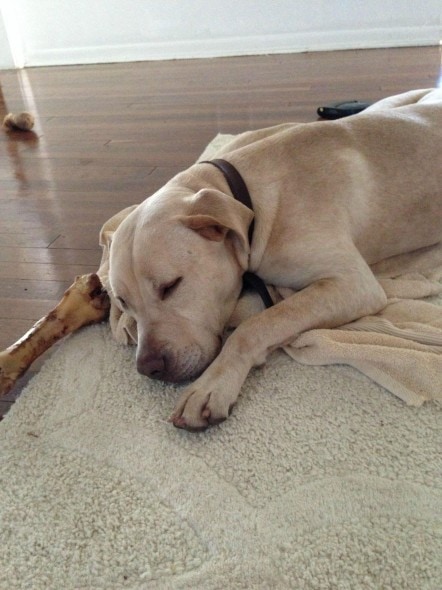 Piper Below lost her dog Jack on a morning walk last week. Jack is now home safe thanks to the internet forum Reddit.

Below found and rescued Jack from the streets back in Septembers. She took him in and nursed the dog back to help with plans of finding him a good home.

“He had skin infections, eye infections. He was filthy, malnourished, you name it,” said Below. “He seemed sweet for a dog that didn’t seem coherent. I have never owned a dog before, but I did my best to nurse him back to health.”

As she cared for Jack she soon realized that she wouldn’t be able to part with him and decided to keep him.

“I kept seeing this incredible personality come out of him,” said Below. “When we went to the vet to get his issues addressed, he just set his chin on my knee and waited calmly while he got prodded and poked. He had only known me for a week, and he had stolen my heart.”

On December 1st Below was walking with Jack and a neighbor in an empty lot near her home when Jack slipped through a gap in the fence. Below watched in horror as Jack ran into the street and was hit by a truck.

“He bounced off the truck, got up and ran back toward us. I thought he was coming back, but he darted off instead,” said Below. “I knew we had to find him.”

That evening Below was trying to get the word out about Jack when she turned to Reddit. She posted in several different forums asking for help finding Jack. When she woke up the next morning she had received hundreds of messages from people wanting to help.

Below was at work last Monday afternoon when she received a phone call from a woman who said she saw Jack. Below quickly went to try to find him. When she met up with the woman Jack was there and the tears began to flow.

“I saw his body relax as soon as he saw me,” said Below. “So I had this scared, filthy dog in my arms and I was crying. There just aren’t words.”

Below is overwhelmed and grateful for all the help and support she received from the Reddit community who were willing to help in any way they could.

“I got e-mails from people that said ‘I go on a walk every day. I’ll reroute near where Jack was lost and look for him.’ One woman said she was stuck at home with an injury and had nothing to do, so she would go look for him. And even when we found him, we met someone who was out looking for him,” said Below.

Jack was taken to the vet for a check-up and besides a few scrapes and bruises he is doing well.