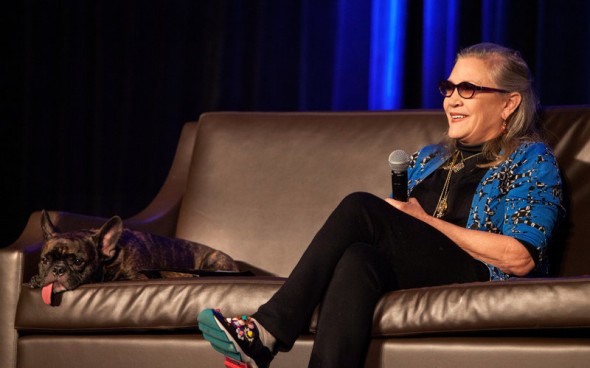 Actress Carrie Fisher was a Hollywood icon.  To many, she will always be Princess Leia of the Star Wars Trilogy (the good ones), but to her dog Gary Fisher, she was far more than that.  She was a mom.  Someone that took him absolutely everywhere she would go and not just as a therapy dog, but as a true friend and companion.

Just about any time you would see Carrie Fisher out and about, it wouldn’t take you very long to find Gary at her side.  They attended movie premiers together, did television appearances, and Gary even became a star in his own right through social media outlets like Instagram and Twitter.  Perhaps one of the more memorable moments is when the two of them were together on National Public Radio’s Fresh Air program.

Terry Gross conducted the on-air interview with Fisher that day, but she had no idea that there would be a third party attending also.  Gary had come along for the interview, but Gross didn’t know it at first because she was at an affiliate radio station in Philadelphia, and Fisher and Gary were at a radio station in New York.  The interview was a very memorable one, and we believe it really highlights just how special Gary was to her. 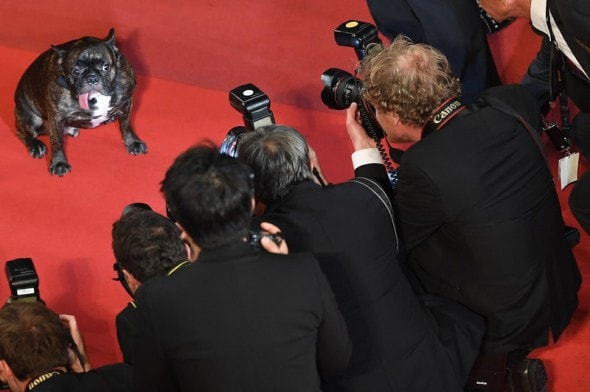 Here’s how the interview went:

GROSS: So I have to ask you about your dog Gary who is now a kind of famous dog, and you use him as your profile picture on Twitter. And he’s – what kind of dog is he?

FISHER: He is a French bulldog.

FISHER: And he’s right here in the studio with me.

GROSS: Yeah. You get to take him everywhere. It’s like — I don’t know that they usually let dogs in the NPR studio. You’re in the NPR bureau in New York. Is he officially a therapy dog?

FISHER: Yeah. I — you know, I didn’t get him for that, but he’s very soothing to have around. He’s licking my hand right now. He’s just very nice to have around.

GROSS: Oh, my God, I hear him licking your hand (laughter).

FISHER: Can you hear him? 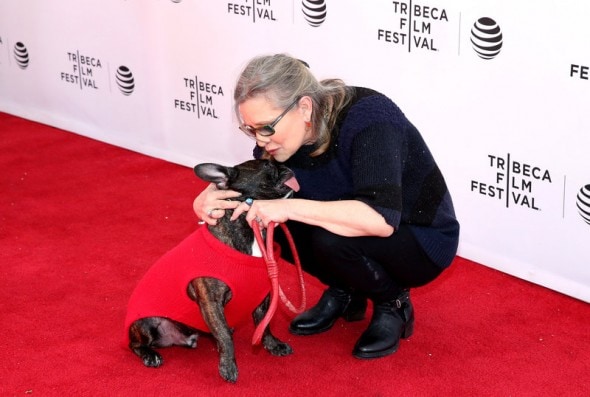 GROSS: Oh, my God that is such a loud lick (laughter).

FISHER: Well, he has a very big tongue.

FISHER: Well, at least it’s not that wet, but it’s a very, very long tongue.

GROSS: (Laughter) So, did you have him certified as a therapy dog, so you could, like, take him onto planes and things like that?

FISHER: Yes. Yes. So he sits with me on the plane. Frequently, he sits in the chair, and I sit on the ground.

GROSS: So how did you find him?

FISHER: I got him here in New York in the village at a very tragic pet store.

FISHER: So he looks like he was from like a puppy mill. He’s not — everything is sort of wrong with him.

GROSS: (Laughter). So what attracted you to him?

FISHER: The tongue. No — I don’t even know if the tongue was like that when I first got him. It just gradually got longer and longer and never went into his mouth.

GROSS: I can’t believe I still hear him licking you.

FISHER: He’s still licking me. I’ll put my hand up. He’s very – he follows me everywhere. He’s the most well-behaved dog I’ve ever had, and I didn’t train him. He can give you a high five. He sits. He sits like Winston Churchill. 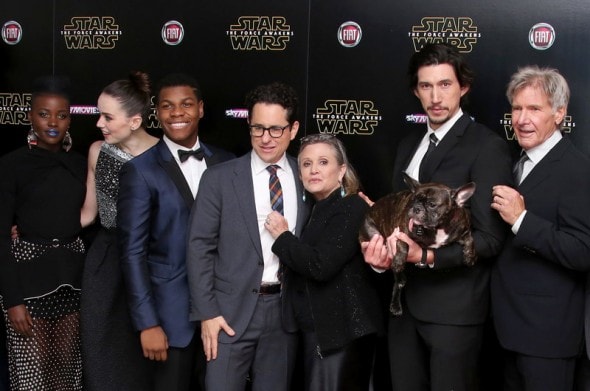 FISHER: He really does. I can’t even — you have to see — I’ll post a picture of what you’ll see.

GROSS: (Laughter). All right. Carrie Fisher, thank you so much for talking with us.

FISHER: Well, thanks for talking to me.

GROSS: And regards to your dog (laughter). Regards to Gary.

FISHER: I’ll lick him for you.

We will definitely miss you Carrie Fisher!  We’ll see you again one day, out there among the stars where a true space princess belongs.