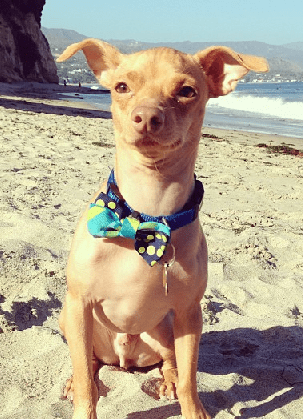 A rescue dog found dumped on the side of a road in San Diego, California now not only has a loving home but nearly half a million fans on Instagram.

Tuna is a Chihuahua Dachshund mix and is almost three-years-olds. When he was found on the side of the road he was found to have a pronounced overbite that caused his teeth to stick out. He also was traumatized from being abandoned and for a while would get around by crawling on his belly instead of walking. This earned the dog an initial name of Wormy.

Courtney Dasher initially offered to foster the dog, but soon fell so much in love with him that she adopted him. His name eventually became Tuan after he was renamed Mr. Burns after the Simpson’s character that he resembled. The name Mr. Burns evolved into Tooney, which was short for cartoon, and then eventually Tuna which is the name that stuck.

Dasher began taking picture of Tuna everyday and posting them on Instagram. She’s been doing it for two and a half years now and Tuna now has over 435,000 fans on site. Tuna’s popularity has grown so much that he even has a store which features products with the pup’s distinct face on them. Portions of the proceeds from the items sold at the online store go to the ASPCA and the rescue that originally saved Tuna.