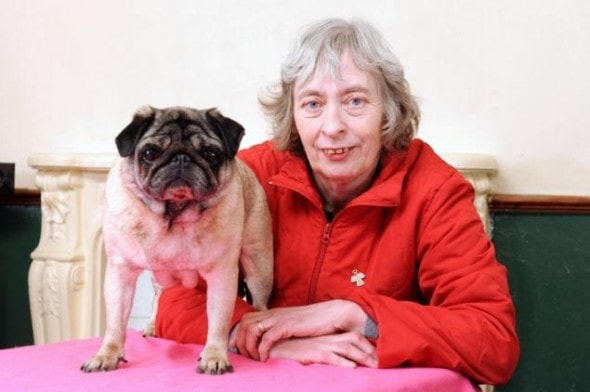 Call it divine intervention, coincidence or karma, but sometimes when we save dogs, they are the ones who rescue us.  That is what happened to Marian Cooper, a UK woman who saved a six-year-old pug named Flo.

Flo could sense something wrong with her owner, and would repeatedly nudge her right breast.

“Flo kept nudging me and digging at me – no matter how many times I put her on the floor she would always climb back up,” she said.

After she could not get Flo to stop pestering her, Marion did a bit of a self-exam and discovered she had a lump.

“I tried using the flat of my hand like the doctors say, but I couldn’t find anything,” she said. “I only found the lump when I really poked around,” Marion said.

She sought medical attention, and doctors told her she had a grade 3 malignant tumor.  At that stage her tumor may have grown aggressively, but doctors were able to successfully remove the tumor and save her life.

Flo has a heart condition, but Marion had to reward her little lifesaver.

“I try not to give her any special treatment, but I did buy her a huge steak the day I got back from hospital – it was ‘doctor’s orders.’”

Marion adopted Flo, who was once a breeding dog, when she was four years old.

“She can’t understand what she’s done for me, Marion said.  “It’s incredible.  I don’t know how she found the cancer but I can never thank her enough.”