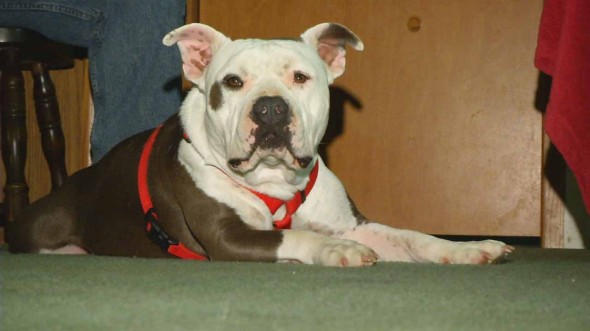 A 3-year-old dog named Chilly is up for the Humane Society of the United States’ Pet of Valor award after Chilly saved the life of her owner last September.

Heidi Parker went to the doctor last September for a routine allergy shot. The dose was more than usual and Parker took a nap when she got home. As she slept Parker unknowingly went into anaphylactic shock. Luckily, Chilly knew something was wrong.

“Chilly is normally a clam dog, she won’t bother you when you’re sleeping and she started jumping on my chest, licking my face just making sure she woke me up,” said Parker.

When Parker did wake up her throat was swollen shut and she could barely breathe. She quickly called 911, but couldn’t even talk to the dispatcher because of the swelling in her throat. Parker isn’t sure how Chilly knew something was wrong, but she is grateful that she did.

“If she wouldn’t have woke me up, I would have died in my sleep,” says Parker.

When the Fluvanna County SPCA, where Parker adopted Chilly, heard Chilly’s story they contacted the HSUS, leading to Chilly’s nomination for the Pet of Valor award. If Chilly wins she will receive an award and the SPCA will win one-year worth of food for the animals in its care.

To vote for Chilly and see the other candidates for the award click here.