Social media strikes again!  This time, thanks to tons of posts of a picture of a rather sad looking pit bull left outdoor in a wire cage.  The dog’s location was discovered, and all of the angry posts on sites like Facebook and Twitter prompted a local pit bull rescue group to go to the person in question’s home and confront her over it.

Needless to say, the woman was not too pleased about Fighting for the Bully’s Pit Bull Rescue showing up to her home.  The group based out of Knoxville, Tennessee, and after they caught wind of what was going on and saw everyone on the internet getting upset about the treatment of the dog.  According to the woman’s neighbors, the dog is left outside, always.

“We all have pets and we love our dogs like they’re family, and this dog is clearly not being cared for. This dog is being kept outside in a tiny crate the size of its body,” said Vanessa Curley.  Curley is one of the neighbors of this woman.

When members of the rescue group asked her about it, all she said was, “She’s not beaten. She’s not starved. None of that. So, I can’t leave her in the cage outside when I leave?”

After that, the rescue group members asked if they could take the dog away, and she got even more upset with them.

The rescue group wasn’t please with that answer, and now seem to be on a mission to get the dog away from this person.  They’ve been instructed to file a lawsuit against the woman in question, so that a judge will be obligated to do a full investigation into any abuse or neglect that may be going on.  The police has responded to calls regarding the dog, and have seen no signs of abuse yet.  The woman has since brought the dog inside, and according to reports, the dog has not been left outdoors. 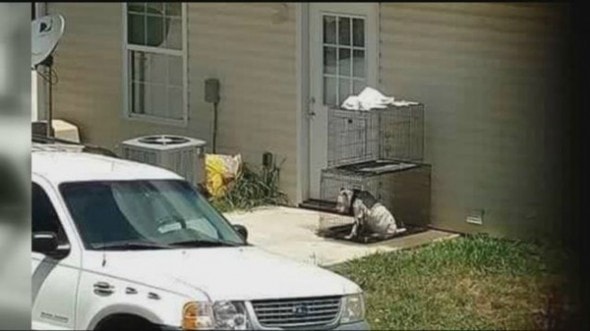