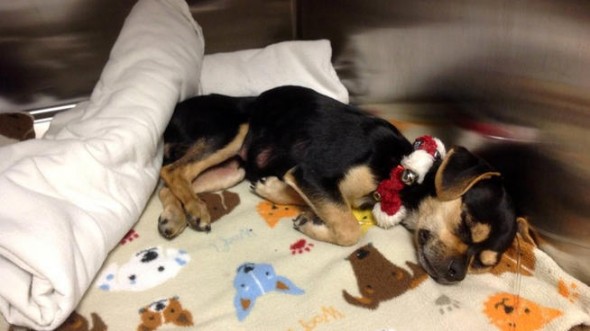 A rescue organization in Texas is asking for help in caring for Evie, a dog found abandoned in a dumpster in a sealed plastic container.

Evie was discovered in a sealed plastic tub in an apartment complex dumpster and brought to a Fort Worth animal shelter. She was dehydrated, had an extremely high fever and suffering from severe neurological issues.

“We’ve no idea what extent of damage to the brain she may have sustained due to the lack of oxygen and extreme body temperature,” wrote the rescue group Friends of Emma on Evie’s fundraising page.

The rescue group Friends of Emma took Evie in and are raising fund to pay for her care. She is receiving around the clock care in ICU and the cost of her treatment is continuing to add up.

To make a donation to help with Evie’s care visit her fundraising page. Updates on Evie will be posted on the Friends of Emma Facebook page.

It is not known who abandoned Evie so cruelly in the dumpster. Evie did give birth several weeks ago, but no puppies were found in the nearby where she was dumped. Animal control is investigating but they do not have much information to work with unfortunately.