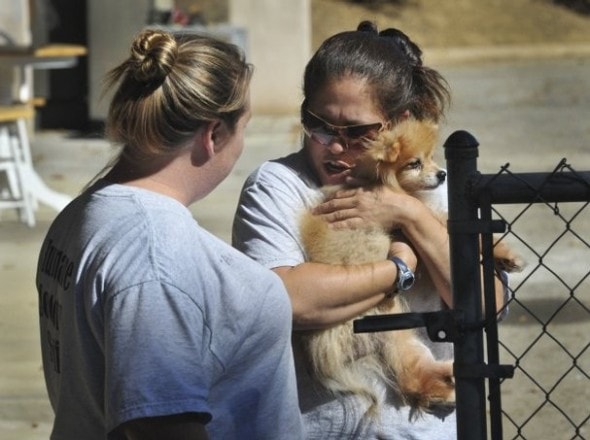 About 60 dogs that were seized by authorities in Ventura County, CA are now becoming available for adoption.  Ironically, the dogs were rescued from Pet Stop Rescue which had 140 dogs, over 5 times the number of dogs on site that were allowed by it’s permit.  The Humane Society of Ventura County said the while the dogs were well fed, they were also dirty, lived in overcrowded conditions and many were in poor health.

John Brockus, the society’s director of investigations, said  “Living conditions were extremely bad, we had to take them immediately.  It was extremely hard to breathe.  It was not healthy for animals or people.” Some of the dogs required veterinary care after being kept 3 to a kennel.  Issues included dental work, pulling teeth, and clearing up infections. Some had nails clipped that had grown into the pads of their paws.

Penny De Rosa, who runs the rescue, is cooperating with authorities and says she did not mean any harm, that she just got in over her head.  Charges have not been laid against her, and there are still as many as 50 dogs residing at her home, however she must clean up her act and limit the number of dogs to 24 according to her permit.  Nine of the dogs have had to be euthanized due to medical issues.

The seizure has put an extreme amount of pressure on the Ojai animal shelter which now desperately needs help finding homes for the dogs.  Many have been cleaned up and cared for and are ready for their forever homes.  Donna Gillesby, who runs county animal services said “I really appreciate rescues that work within their means, I know the majority of rescues really take care to make sure they don’t take care of more than they can care for.”

Gillespie adds, “I need people to open their hearts and homes now more than ever.”  The dogs are mostly small, ranging from Chihuahuas to terrier mixes, including corgis, Pekingese, poodles and a pair of puggle mixes that appear to be best friends. Brockus calls them Happy and Happier.

To adopt a dog: